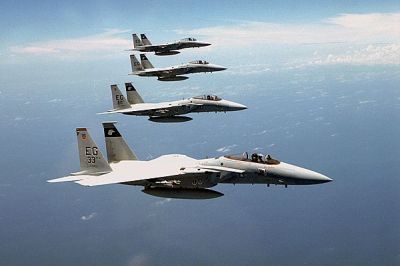 Source: Courtesy Boeing Co.
Last year, the United States exported a total of $23.7 billion in weapons to the rest of the world. The leading exporter of those weapons was Boeing Co. (NYSE: BA), which earned 30% of its 2014 revenues of $90.76 billion “pursuant to U.S. government contracts, which include foreign military sales through the U.S. government.”

Including commercial aircraft, the Middle East accounted for $9.24 billion of Boeing’s revenues in 2014. Boeing does not furnish any more granular data on its sales of defense goods to foreign governments. As we have noted elsewhere, Saudi Arabia was the world’s leading importer of arms in 2014, purchasing a total of $6.5 billion worth of military goods, and that total is expected to rise to $9.8 billion in 2015.

Boeing’s total sales to the U.S. government, including foreign sales, dropped on a percentage basis from 34% in 2013 to 30% in 2014. In December of 2011, Boeing confirmed a Saudi order for 84 new F-15 Strike Eagle fighters and a contract to upgrade 70 existing F-15s. Including new helicopters, support and training, the total sale to Saudi Arabia was worth about $29.4 billion to Boeing. That stands as the largest foreign military arms sale in U.S. history.

F-15 deliveries under the contract are scheduled to begin this year and conclude by 2019. Boeing is expected to begin installing the 70 upgrades next year.