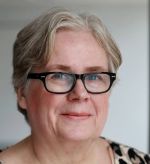 Carla Baranauckas is a reporter, writer, editor and educator based in New York.

She was on staff for 21 years at The New York Times, where she was involved with the coverage of major sporting events, local and national elections, the collapse of the Soviet Union, the impeachment of President Bill Clinton, the wars in Afghanistan and Iraq, and the 1993 and 2001 attacks on the World Trade Center in New York. She was a contributor to the “Portraits of Grief” profiles of people who died in the 9/11 attacks, which was part of The Times’ Pulitzer Prize-winning coverage.

Baranauckas has also been on staff at The Record of Bergen County, New Jersey, The St. Louis Post-Dispatch and The Grand Forks Herald in North Dakota. Her work has appeared on the websites of The Washington Post, HuffPost, NextAvenue, The Street, AOL, and The Canine Review.

For 15 years, Baranauckas was an adjunct associate professor at the Columbia University Graduate School of Journalism, where she taught reporting, editing and digital media skills. Many of her students have gone on to work for major media organizations across the country, and several have won Pulitzer Prizes.

Baranauckas has a bachelor’s degree in English from St. Olaf College and a master’s degree in journalism from Columbia University.

It’s easy enough to fall in love with a popular automobile. But for most Americans the love affair ends after about six years, according to research by automotive industry consultancy firm R.L....
Carla Baranauckas
4 days ago

The average American keeps a new vehicle for about six years, according to research by automotive industry consultancy firm R.L. Polk. But chances are you’re seeing many cars, SUVs and pickups on...
Carla Baranauckas
9 days ago

How COVID-19 Has Disproportionately Affected Minority Communities In Every State

Protesters have taken to the streets across the country in the last month demanding that cities “defund the police” and re-examine use-of-force policies. The demonstrations, most of them...
Carla Baranauckas, Carl Sullivan
8 months ago

States Where COVID-19 Cases Have Doubled Since Last Month

It has been about two months since stay-at-home orders began to expire and states began the gradual reopening of their economies. Reports of surges of new coronavirus cases in several states that...
Hristina Byrnes, Carla Baranauckas, Carl Sullivan
8 months ago
Last Updated: 7 months ago

Protesters have taken to the streets across the country in the last month demanding that cities “defund the police” and re-examine use-of-force policies. The demonstrations, most of them...
Carl Sullivan, Carla Baranauckas
8 months ago
Last Updated: 6 months ago

Roku, seeking more traction with advertisers, will be the first presenter at the IAB's NewFronts next week.
Carla Baranauckas
8 months ago

CSX CEO says the rail company has responded well to the pandemic slump and aims to take market share from the trucking industry.
Carla Baranauckas
8 months ago

Even when the 737 Max is cleared to fly again, Boeing will have to deal with reduced demand and increased oversight.
Carla Baranauckas
8 months ago
Last Updated: 8 months ago

Does Facebook Stock Have an Angel on Its Shoulder?

Disney Stock Tumbles Amid Fears of Surge in COVID-19

Fears of a second wave of the pandemic have hit Disney and other stocks even as theme parks are set to reopen.
Carla Baranauckas
8 months ago
Get Our Free Investment Newsletter