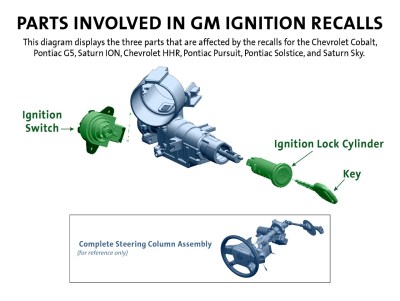 Source: General Motors Co.
The recall of some 2.6 million General Motors Co. (NYSE: GM) vehicles to replace a faulty ignition switch has already forced the company to reserve more than $1 billion to make the needed repairs. Now the company has provided a video showing that it is safe to drive the recalled cars, as long as drivers use only a single key on the key ring and the key fob is removed. Drivers are also advised to use only an original GM key, not a replacement key.

GM has offered owners of the affected vehicles a temporary replacement if they do not want to drive the cars until the repair is made, but that could be a very expensive offer. To try to cut down on the number of takers, GM originally advised dealers not to publicize the offer.