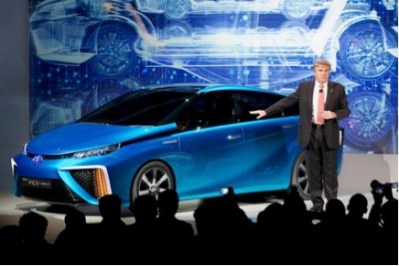 To hear some analysts and auto enthusiasts tell it, it’s a done deal: The car of the future will be battery-powered.

That’s the big bet that Tesla Motors (NASDAQ: TSLA) and its investors have made.

It makes some sense. It’s increasingly clear that the auto industry will move past internal combustion at a certain point. And Tesla’s Model S has proven that a battery–electric car can be both practical and desirable.

A very big name turns away from battery-electric cars
Few companies know more about battery–powered cars than Toyota. The company’s Prius is far and away the world’s best–selling hybrid. Toyota has built over 6 million hybrids to date. And the Japanese automaker is a big investor in Tesla.

Toyota has spent 20 years trying to create a viable mass–market battery–electric vehicle.  But lately, the company has hinted that it has given up the effort.

Lentz said the technology is only viable in “a select way, in short range vehicles that take you that extra mile, from the office to the train, or home to the train, as well as being used on large campuses.”

For a primary vehicle intended for longer–range travel, Toyota feels there are better alternatives, like hybrids. And like fuel cells, the technology the company is investing heavily in now.

A big bet on a new-to-market technology
Fuel cells are devices that take energy from a fuel (usually hydrogen gas) and chemically convert it to electricity. Hydrogen–powered fuel–cell vehicles are electric cars that run on “gas” — hydrogen gas — but their only “exhaust” is water vapor.

Automakers have been tinkering with this technology for decades. But it’s coming to market: Hyundai (NASDAQOTH: HYMTF) already offers a cell version of its Tucson SUV at a few dealers in Southern California, while Toyota and other companies say they will bring fuel–cell cars to market in a bigger way over the next couple years.

Toyota has been showing off a vehicle called the “FCV Concept” that is widely believed to be a preview of the fuel–cell car the automaker plans to start building next year.

That’s the most visible aspect of the company’s shift in emphasis. But that shift is real, and it’s recent.

Back in 2010, Toyota invested about $50 million in Tesla, and the two companies agreed to a deal in which Tesla would provide the drivetrains for a battery–electric version of Toyota’s RAV4 SUV.

But after buying Tesla components for about 2,600 electric RAV4s, Toyota recently ended that deal. The product had a lot of promise, but there were increasing signs that sales were slow.

While Lentz acknowledged that Toyota learned a lot from working with Tesla, he told Automotive News that the decision to end the deal was simple: He’d rather invest the money in fuel cells.

So are hydrogen cars the future?
Nobody knows. Right now, Toyota thinks they’re a better bet than battery–electric cars. That means something because of Toyota’s green–car cred and status in the global auto industry, but this is just one voice, and the company may yet be wrong.

The nearer–term question is whether Toyota’s upcoming fuel–cell car will sell. It will depend on the car’s pricing and the availability of refueling stations. There aren’t very many now, but more are coming, at least if you live in California.

Toyota has arranged a $7 million loan to a company called FirstElement Fuel that is building hydrogen stations in California. The company expects to have a basic network of stations in place by fall 2015, with 50 in operation by the end of 2016.

Toyota’s reputation for quality will help sales and speed greater adoption of the technology, if the overall package makes sense as more than a technological curiosity. We’ll see.

Are you ready to profit from this $14.4 trillion revolution?
Let’s face it, every investor wants to get in on revolutionary ideas before they hit it big. Like buying PC-maker Dell in the late 1980s, before the consumer computing boom. Or purchasing stock in e-commerce pioneer Amazon.com in the late 1990s, when it was nothing more than an upstart online bookstore. The problem is, most investors don’t understand the key to investing in hyper-growth markets. The real trick is to find a small-cap “pure-play” and then watch as it grows in EXPLOSIVE lockstep with its industry. Our expert team of equity analysts has identified one stock that’s poised to produce rocket-ship returns with the next $14.4 TRILLION industry. Click here to get the full story in this eye-opening report.