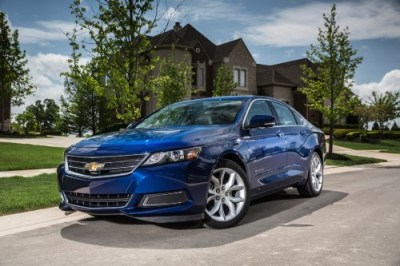 Source: courtesy of General Motors
While car and light truck sales have surged in the past year, so have their prices. At least gasoline prices have fallen, which could provide money for down payments.

According to new research:

The analysts at Kelley Blue Book http://www.kbb.com, the only vehicle valuation and information source trusted and relied upon by both consumers and the automotive industry, today report the estimated average transaction price (ATP) for light vehicles in the United States was $33,993 in January 2015. New-car prices have increased by $1,694 (up 5.2 percent) from January 2014, while dropping $570 (down 1.7 percent) from last month.

The year-over-year data may be more important, since pricing is seasonal, and the price of new models may have lifted December results.

The company that has been most able to aggressively raise prices is General Motors Co. (NYSE: GM). What it can charge for the average vehicle it produces and sells rose 8.2% since last January to $37,875. GM also had the highest transaction price last month among all the major car manufacturers. GM models include Buick, Cadillac, Chevy and GMC.

While GM’s bottom line should benefit from its price leverage, some other manufacturers where not so fortunate. KBB reports that troubled car company Volkswagen was only able to raise prices 0.2% from January to January. Perhaps it cannot raise prices because of slack demand for its vehicles. The most successful manufacturer over the past two years, in terms of sales increases — Fiat Chrysler Automobiles N.V. (NYSE: FCAU) — was able to lift prices only by 2.7% to an average of $33,308. Fiat Chrysler models include Chrysler, Dodge, Fiat, Jeep and RAM. Toyota Motor Corp. (NYSE: TM) also had problems lifting prices. The largest Japanese car company was able to increase the average price paid for its vehicles by 2.7% to $31,058. Its models include Toyota, Lexus and Scion.

KBB researchers report that one of the major reasons for GM’s ability to increase prices may not last long:

General Motors increased significantly in its average transaction prices at 8.2 percent year-over-year, benefitting from their full lineup of SUV and truck models, along with low gas prices. General Motors’ full-size SUV lineup hit the market last year at the right time, and prices for the Cadillac Escalade, Chevrolet Suburban, Chevrolet Tahoe and GMC Yukon/Yukon XL are all up more than 10 percent from this time last year.

Gasoline and oil prices have started to rise from their bottoms. If that continues, truck and SUV makers will lose some of their leverage. One reason car companies have price leverage is the ease with which buyers can get loans. However, some of these borrowers may lack the means to pay off their loans.

A recent article in Forbes points out:

[S]ales of US subprime auto ABS totaled more than $17.4 billion in 2014, after a record $22 billion were sold in 2013. Auto lenders have even started offering ABS with a “prefunding” feature that effectively packages securitized bundles of auto loans before they’ve even been made. While that might sound crazy and reminiscent of 2008, easier lending standards have been a big driver of vehicle sales that continue to beat expectations. The head of Honda’s US sales recently warned that competitors are doing “stupid things” to gain an advantage.

In other words, new car sales, and prices, could drop as quickly as they advanced.