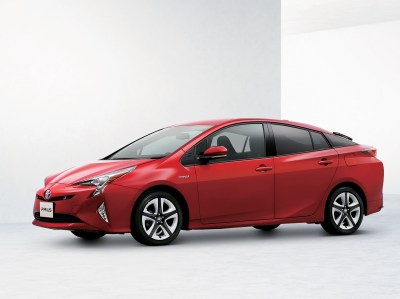 Source: courtesy of Toyota Motor Corp.
Hybrid and electric cars were the rage when gas prices where high. The grandfather of the category has been the Toyota Motor Corp. (NYSE: TM), which recently fell on very hard times. Sales of the hybrid were off 26.7% to 11,027 in June and 25.2% to 67,405 for the first six months. Incentives on the Prius have moved aggressively to .9% for 72 months to clear inventory before the next model year of the hybrid arrives.

The Prius first came off the production line in 1997. Toyota has sold 3.7 million worldwide since then. Recently sales have been challenged by an army of other hybrids and the new-found attraction of all-electric cars like the Tesla Motor Corp. (NASDAQ: TSLA) Model 3, which will be priced at $35,000 before government incentives, that could be several thousands of dollars more. That will bring the car to about the same price level as a well-outfitted Prius. Granted, the Tesla will not be available until 2017, but the company has several hundred thousands of orders.

Virtually every large global manufacturer has one or more hybrid models. This was not the case when the Prius first hit the market. Even Toyota current has hybrid and FCV (fuel cell vehicle) of its Camry, Avalon, RAV4, Highlander, and Marai models.  In a sense, Toyota competes against the Prius.

All of the major manufacturers have started work on electric vehicles which will put pressure on hybrid sales. The most visible of these from U.S. manufactures is General Motors Co.’s (NYSE: GM) Chevy Bolt, which America’s large car company says will outsell Tesla models by a mile.

The Prius is lost, virtually, in an ocean of new competition. And, there is not evidence that the ancient hybrid can battle its way back into the lead it once held. The flood of competition is too great, and being first to market no longer has any value.