Source: Thinkstock
The massive snapback rally on Wednesday in stocks in the United States and Europe is tied to word that Angela Merkel may be committed to signing a deal with Greece. This has so far been questioned and has yet to be confirmed, but the move is taking away the constant and endless pressure that Greece is exerting on markets. And now the latest news is that Merkel is meeting with François Hollande from France and Alexis Tsipras from Greece on Wednesday evening.

While it is far too soon to declare victory here, the New York trading in American depositary shares (ADSs) of National Bank of Greece S.A. (NYSE: NBG) is acting as though they want to believe the news. If a deal is struck, investors should know that this highly diminishes the risks of any bank nationalizations in Greece. Those same investors need to also understand that this likely would mean that this is a kicking the can down the road solution, and that just means that any of the Greek pressure can come up again down the road, when the governing party decides the prior deal was still not good enough.

Investors and traders in the United States use the NBG ADSs as a proxy for voting on Greek sentiment each day. A rally of 5.6% was good to see to get shares back above the $1.30 mark in New York trading.

ALSO READ: How to Protect Yourself From a Summer Stock Market Crash

Amazingly, short sellers are likely very little part of the move on Wednesday in the ADSs of NBG shares. The short interest for the May 29 settlement date was 14.2 million shares, which was down compared to the previous settlement date’s reading of 15.6 million.

Whether or not a deal is reached, the current lean is that Greece is willing to accept a higher primary surplus target. There also have been reports that Greece wants to push the new deal deadline out to 2016.

Again, any deal that is reached with Greece is not permanent. The Greeks can hold a vote of confidence and, depending on the outcome, it can create new elections and a new regime that can try to challenge any deal the prior regime made. If you don’t believe that, well ask yourself how Greece is getting to hold Europe hostage all over again after deals have been reached before. 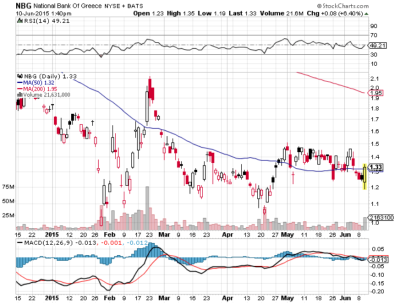