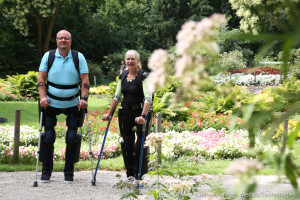 Source: ReWalk Robotics Ltd.
ReWalk Robotics Ltd. (NASDAQ: RWLK) saw its shares nearly double Friday morning, following an initial public offering (IPO) of 3 million shares at $12 a share. The company had originally planned to sell 3.4 million shares in a price range of $14 to $16, and the response from investors indicates that they think they know something that the underwriters didn’t.

ReWalk is an Israel-based medical device company that designs and sells exoskeletons that give mobility-impaired patients the ability to walk. The company has developed its ReWalk exoskeleton using patented tilt-sensor technology and an on-board computer with motion sensors that drives motorized legs that literally walk for the user. The company’s two products include ReWalk Personal and ReWalk Rehabilitation.

The IPO filing shows an estimated NSCISC report that as of 2013 there were 273,000 people in the United States living with spinal cord injury, with an annual incidence of approximately 12,000 new cases per year. Roughly 42,000 of those patients are veterans and are eligible for medical care and other benefits from the Veterans’ Administration. The company further said that it believes almost 80% or 218,000 of spinal cord injury patients in the United States could be candidates for current or future ReWalk products.

One caveat we noted before the IPO is the low number of sales so far: just 17 ReWalk Rehabilitation units and only eight ReWalk Personal units sold in 2013. In 2012 the company sold 14 and four units, respectively. Sales were lower year-over-year in the first quarter of 2014 as well. That means that ReWalk is a play on future sales, and there appear to have been plenty of players Friday.