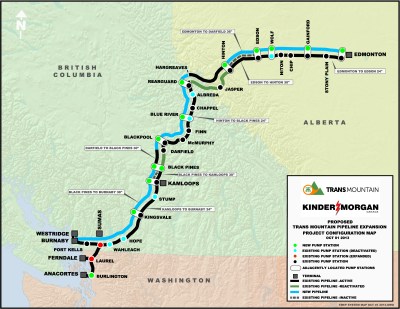 Source: Kinder Morgan Energy Partners LP
Kinder Morgan Canada, a division of Kinder Morgan Energy Partners LP, (NYSE: KMP), is preparing to file a formal application with the Canadian government to nearly triple the size of its Trans Mountain pipeline system that currently moves 300,000 barrels a day of crude oil from Edmonton, Alberta, to the country’s west coast near Vancouver, British Columbia. The pipeline project, if approved, would begin construction in 2015 and be completed two years later.

The Trans Mountain expansion would add a second-pipeline in the same right-of-way as the current pipeline and boost capacity to a total of 890,000 barrels a day. Last year oil sands production totaled 1.9 million barrels a day, and by 2022 production is forecast to double. The estimated cost of the expansion is $5.4 billion.

Combined with another pipeline, the Energy East pipeline proposed by TransCanada Corp. (NYSE: TRP), that would transport up to 1.1 million barrels a day from Alberta and Saskatchewan to refineries in Eastern Canada, nearly 2 million barrels a day of crude from the oil sands region will get to market without crossing the international border with the U.S.

Neither the Trans Mountain project nor the Energy East project is a sure thing. There is plenty of opposition to oil sands mining and pipelines from Canadians. But the pressure from producers in the region on the Canadian government is likely to have a lot more impact than pressure on the U.S. State Department to approve the Keystone XL pipeline. Oil & gas production accounts for 8% of Canada’s GDP

Crude production in the U.S. is growing very fast and the lighter oil that is being produced in North Dakota and Texas is finding its way to refiners on all three U.S. coasts by a combination of pipeline and rail transport. And it must have occurred to someone in the State Department or in the Obama administration by now that the Keystone XL will provide little economic benefit to any U.S. constituency except oil sands producers like Exxon Mobil Corp. (NYSE: XOM) and Chevron Corp. (NYSE: CVX) among others. U.S. consumers are not likely to see any reduction in pump prices; after all, the whole reason for building the Keystone XL is to raise the price that producers get paid.

Watch for the reaction to Kinder Morgan’s application to expand the Trans Mountain pipeline. If it is relatively muted, the Keystone XL could be well and truly finished.