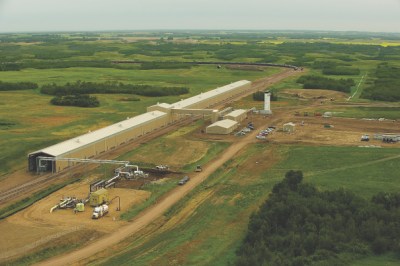 Source: USD Partners LP
Transporting crude oil from the Bakken field in the Upper Midwest and the oil sands of Alberta has become a big business for railroads. As long as pipeline transportation remains constrained, railroads will continue to offer the best solution for producers. With that in mind, a company called USD Partners L.P. on Friday filed for an initial public offering to raise $150 million.

The company will be organized as a master limited partnership (MLP) and it plans to apply for a listing to trade its common units on the New York Stock Exchange under the ticker symbol USDP. USD Partners did not indicate either an offering price or the number of shares it plans to offer in its Friday filing.

In its filing the company says that substantially all of its current loading capacity is contracted under multiyear, take-or-pay service agreements with seven customers and that about 83% of its Hardesty utilization is contracted with subsidiaries of five investment grade companies. The contracts with the seven customers run for six years beginning this year.

A 120-car unit train can transport about 31,800 barrels of oil, and USD Partners plans to add capacity for two more trains in its phase II build-out and one more train in its phase III plan.

In its initial filing the company said it plans to distribute an unspecified amount of cash from its IPO to USD Group LLC, its parent, and to repay an unspecified amount of its outstanding $97.8 million in debt on its $150 million credit facility and pay fees associated with a new senior secured credit agreement for $100 million. Any funds remaining from the IPO will be used for general partnership purposes, including the purchase of phases II and III from its parent.

The date of the IPO is unspecified, but is expected before the end of this year.