Who Wins If Keystone XL Is Approved? 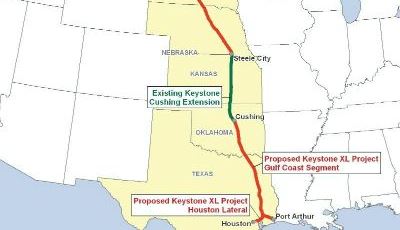 Source: courtesy U.S. State Department
The U.S. House of Representatives is scheduled to vote Friday on — and certainly approve — a measure to allow construction of the Keystone XL crude oil pipeline by TransCanada Corp. (NYSE: TRP). The Senate will vote on a similar measure next Tuesday. Assuming that one passes as well, the legislation would go to President Obama for his signature. And that, if we can believe the president, is where the momentum will stop.

The legislation being proposed essentially eliminates the president from the process of reviewing energy pipelines that cross an international border. No president would be likely to sign such legislation. Whether there are enough votes in the Senate to overcome a presidential veto is questionable, especially because the scheduled Senate vote has been agreed to as a maneuver to help Louisiana’s Democratic Senator Mary Landrieu keep her seat in a December runoff against her Republican challenger, Congressman Bill Cassidy, who is sponsoring the legislation in the House.

But who needs the Keystone XL at this point, and why? Over the six years since TransCanada first applied for a permit to build the pipeline, proponents of the pipeline have argued that job creation and added diversity to the supply of U.S. crude are the main benefits of the project. Opponents have argued that pipeline only encourages more development in the Canadian oil sands, extends U.S. dependence on fossil fuels and exacerbates the risk of a severe pipeline spill.

ALSO READ: How the Election Will Impact the Keystone Pipeline, Oil Exports

Less well understood is who really benefits from moving some 830,000 more barrels of Canadian crude to the Gulf Coast. U.S. consumers are already getting a huge bonus as the price of crude drops like a stone. Will construction of the Keystone XL cut prices even further?

Over the past couple of years, as rail transportation out of the oil sands and the Bakken shale play in North Dakota have improved, the price differential between Western Canadian Select (WCS), a heavy, sour crude, and Mexican Maya, a Mexican crude that is very similar to WCS, has tightened from around $34 a barrel last November to about $6.50 earlier this week. The differential between WCS and West Texas Intermediate (WTI), the U.S. benchmark light, sweet crude, rose to $42 a barrel last November and fell to about $12.50 a barrel last month.

Pipeline transportation, say through a new Keystone XL pipeline, costs about $11 a barrel. Two new pipelines out of Cushing, Okla., to the Gulf Coast will open in December and that will make rail transport even less attractive as an alternative to a new pipeline.

So who wins? The oil sands producers like Exxon Mobil Corp. (NYSE: XOM), Chevron Corp. (NYSE: CVX), Suncor Energy Inc. (NYSE: SU) and about 50 other oil and gas companies operating in the region. It is difficult to predict whether they will still be the winners after the two years it takes to build the Keystone XL — and probably longer if environmental activists challenge every inch of the pipeline, as they almost surely will. But in the near-term, the producers — and TransCanada — look to gain the most if the pipeline is approved and built.

President Obama has said that once the Nebraska court case regarding the pipeline route is settled, he will personally review the pipeline to make sure it does not accelerate climate change, and he said earlier Friday at a press conference in Burma that he must “constantly push back against this idea that somehow the Keystone pipeline is either this massive jobs bill for the United States or is somehow lowering gas prices.”

The president is right on both counts. That does not mean he will prevail.