Is a 12% Capex Cut by Exxon Mobil Realistic?

Source: Wikimedia Commons
Exxon Mobil Corp. (NYSE: XOM) on Wednesday offered investors a look at its plans for the next three years. In an investor day presentation in New York, Exxon said it plans to cut capital spending by about 12% in 2015, compared with 2014 spending, and to increase production by 2% to 4.1 million barrels of oil equivalent per day.

Exxon’s 2015 production growth is expected to come from the deepwater Gulf of Mexico, the Alberta oil sands, a new conventional field in Indonesia and expanded deepwater projects in Nigeria and Angola. Exxon does plan to raise production in its Bakken, Permian Basin and Ardmore/Marietta onshore shale plays, but production growth onshore in the United States looks to be about half the growth of major projects around the world, even though U.S. liquids production will double by 2017. See the production growth chart below.

Also note that Exxon planned its budget on a price of $55 per barrel of Brent crude. Brent traded at around $60 a barrel on the ICE Wednesday afternoon in London.

The company also provided a nice graphic depicting its 92 billion oil equivalent barrel (BOEB) resource base divided by type of resource, location and classification. The company’s proved reserve base of 25.3 billion is the company’s money in the bank. The remainder could or could not materialize, and in any event is probably years down the road. The resource base chart is also available below.

Exxon is now beginning to reap the benefits of the investments it made years ago, before the shale revolution hit the United States and the supermajor oil companies all thought they would be commanding prices for produced oil that would offer nice margins and healthy returns when the multibillion projects were operating.

The shale revolution changed the calculus, but as the saying goes, “In for penny, in for a pound.” Exxon and its peers could not just stop work because they had contracts with sovereign nations and national oil companies that required them to meet certain goals. In 2014 Exxon added 250,000 barrels of oil equivalent production a day, and the company expects to add another 300,000 barrels a day in 2015. Projects scheduled for 2016 and 2017 are expected to add an additional 400,000 barrels a day.

One place where Exxon has seen solid growth and where it expects to see more is in its downstream refining and chemicals businesses. Return on capital invested in downstream operations has fallen from a peak of around 40% in 2012 to around 16% last year, about equal to Exxon’s overall return on capital.

One last note: Exxon sold $8 billion in new debt on Tuesday, its biggest bond offering ever. The company’s AAA debt rating is based on the value of its proved reserves. Those reserves are now worth $95 a barrel, based on the formula the U.S. Securities and Exchange Commission requires companies to use to compute the value of their reserves. In the first quarter that number dropped to just over $51 a barrel. 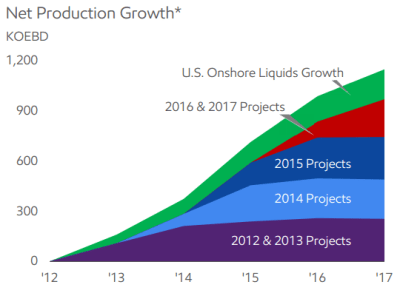 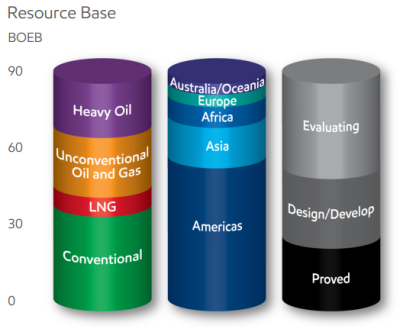 Who Is Turning Up the Heat on Exxon Mobil?

Gas Surges Above $3 In These States as Oil Prices Jump