Oil US Keeps in the Ground Steadies at 665 Million Barrels

America’s Strategic Petroleum Reserve is the largest supply of emergency oil in the world. After drawing down several million barrels in two of the past four months, the amount has leveled off at 644.8 million barrels. That is enough for the facility to continue its job of providing the United States with oil in the event of a long-term spike in prices.

After the drawdown, the reserve has 250.3 million barrels of sweet crude and 394.5 million barrels of sour. Sweet crude is low in sulfur and is used primarily to be refined for gasoline. Sour crude has high amounts of sulfur, which adds to the amount it needs to be refined and the length of time that takes. It also can be used to produce gasoline, but the price of the gas is much higher.

The most recent drawdowns were to exchange older oil held in the reserve for newer inventory. While that is an ongoing procedure done each government fiscal year, the quality of the oil is essential. The Atlantic hurricane season runs from June 1 to November 30. The reserve was tapped to provide crude after Hurricane Harvey in 2017 and Hurricane Isaac in 2012. In both cases, the drawdowns were replaced by private refiners who essentially “borrowed” supply. Hurricane Katrina in 2005 so severely damaged production that the drawdown needed to be replaced later. According to the U.S. Department of Energy, “The total U.S. response to Hurricane Katrina, considering both the emergency loans of 9.8 million barrels and the 11 million barrels of oil that was sold, was 20.8 million barrels.”

The last massive release of crude from the reserve was in 1991 during Desert Storm. Conflicts in the Middle East had disrupted the oil markets.

The federal government’s interest in creating the reserve begun after the Arab Oil Embargo in 1973 to 1974, which pushed gas prices up sharply and threatened the U.S. economy. The first oil for the reserve was purchased in 1977. Today, the oil is stored in nearly 500 salt domes. Rock salt is impervious to liquid, gas and inert petroleum.

Tensions in the Middle East have heightened recently as tankers have been seized in the Strait of Hormuz. Almost a quarter of the world’s crude passes through the narrow body of water. Political and social turmoil in Venezuela has cut production from a country that has among the largest proven oil reserves in the world.

The average price of oil in the reserve is $29.70 a barrel. Brent crude trades near $60 a barrel. However, per-barrel prices have reached well above $100 in the past 11 years, and most economists believe that a prolonged period of very expensive oil could severely damage the U.S. economy. The price of gasoline, in particular, would be affected. An analysis of gas prices shows that they reached almost $3 a gallon a few months ago. The danger of that figure rising sharply in an energy emergency is unlikely. The United States has created a large buffer. 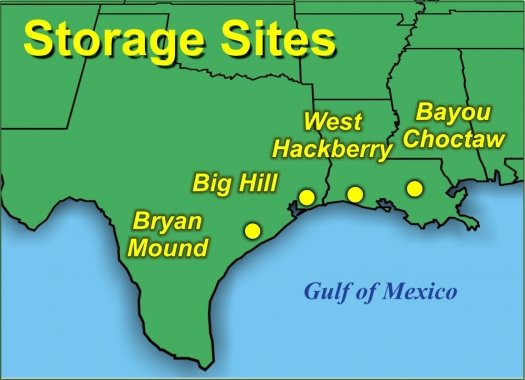