Trying to figure out just how important the green economy is to the entire U.S. economy has been as much an art as a science. The U.S. Department of Labor stopped collecting data related to the green economy in fiscal year 2013 and that data only reflected the impact up through 2011.

The sharp increase was due, in large part, to what the researchers included in the green economy. In the area of employment, for example, the Bureau of Labor Statistics (BLS), in the 2013 report, estimated that there were 3.4 million green jobs (2.6% of all U.S. jobs). But the total included only companies that earned 50% or more of their revenues from green products and services and included only those jobs that contributed to output. So-called process jobs (jobs focused on the adoption of energy-saving or another “environmental” behavior by corporations or individuals) were not included. Neither were green advocacy or education jobs not directly related to a green product or service. A 2012 BLS estimate of all green goods and services jobs estimated 1.95 million jobs were accounted for by firms where 100% of output was green and 6.11 million jobs were supported by firms with some green activity.

The British researchers applied a transactional approach to the problem of accurate data collection using a method that triangulates and cross-checks data from many sources. Using this method, they were able to estimate sales and jobs in the green economy, including supply chain activities, for the United States and other leading economies. For example, they analyzed core and supply chain activities on approximately 3,800 activities included in their dataset and found that 45% were core activities and 55% were supply chain activities.

The following presents U.S. data from four fiscal years, 2013 through 2016, showing both sales and employment for each year. LEGSS is the 3,800-entry Low Carbon and Environmental Goods and Services Sector data set the researchers used. 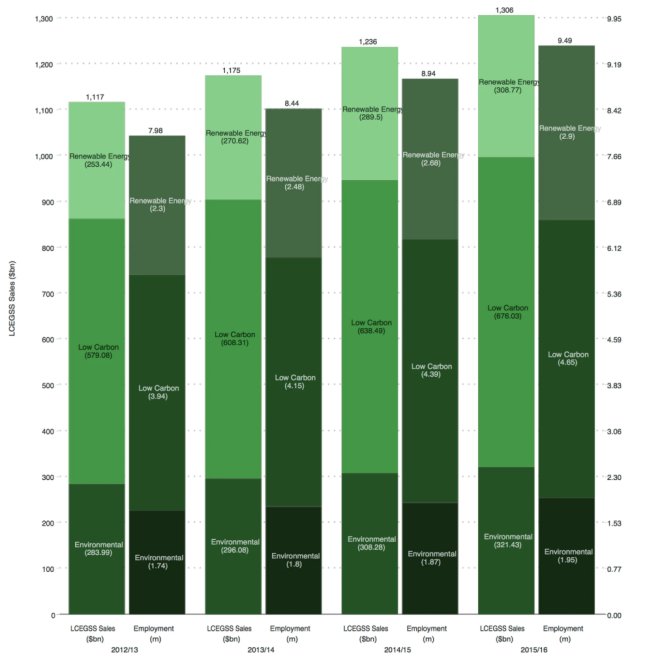 The authors conclude: “The economic case for driving economic growth and job creation through fossil fuels has weakened based on the employment estimates in fossil fuels, and there are genuine risks of stranded assets. To safeguard US economic development and job creation, we suggest that economic, environmental and education policies need to be developed to support the US green economy in the context of global developments in the green economy.”

An oil industry group called the Oil and Gas Climate Initiative includes 13 of the world’s largest oil companies, and in its 2019 annual report boasts of a $1 billion fund to support small companies with promising technology to help mitigate the looming climate disaster. U.S. companies alone are expected to spend some $150 billion on new exploration and production this year. Regardless of the environmental damage that could be caused by increased fossil fuel production, oil and gas companies are planning to boost production by some 7 million barrels a day over the next dozen years.