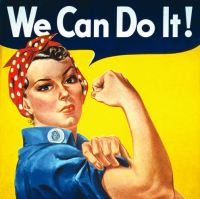 24/7 Wall St. investigated the increasing numbers of men turning to jobs that are — still — much more often held by women. We looked at change in male participation between 2000 and 2011 among jobs that employ at least 75% women to identify the professions where the proportion of men has increased the most. While no one factor can explain the increased male presence in these female-dominated jobs, a sluggish economy, new opportunities and changing gender roles contribute to the change.

According to several reports on the subject, as well as numerous interviews we conducted, men often take to these roles due to economic necessity. In a weak economy, people are more likely to pursue jobs they otherwise would not consider. Discussing clerk and teller jobs — a pink-collar occupation — Carol Kaplan, the media contact for the American Bankers Association, explained that these are typically part-time positions dominated by women, but that men could be increasingly entering these positions because they are unemployed and can find no other work.

Most of the so-called pink-collar jobs we reviewed are part-time ones. As many as 62% of dental hygienists and clerical library assistants work part time. This is because, traditionally, it was more common for women to assume greater domestic responsibility, and part-time roles offered them some flexibility. According to interviews we conducted, the part-time nature of these jobs also means they have a higher turnover rate than other occupations, making them more accessible to men looking for work as a result of the economic downturn.

All of the female-dominated jobs in which men have made the greatest inroads require less than a four-year college degree. Dental hygienists and paralegals must have a minimum of an associate degree, while only some high school education is necessary for personal care aide and clerical library assistant jobs. The lack of high-level requirements for many of these occupations means men looking for work are more easily able to step into these positions than some other roles.

Also Read: Ten Brands That Will Disappear In 2013

These are the nine pink-collar jobs America’s men want most.