10 Most Expensive Places to Get Married 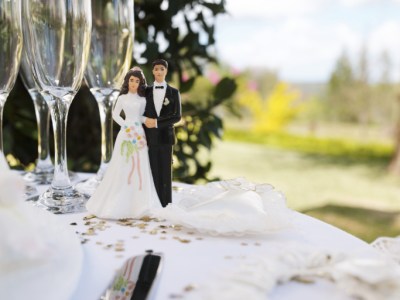 You can’t put a price on love, but you can put a price on marriage, or at least the wedding with which it begins. The average U.S. wedding cost $31,213 in 2014. That’s a lot of money, especially as median household income averaged $52,250 the previous year. Obviously, Americans are willing to spend big bucks for their big day, but what they spend varies enormously from state to state.

Wedding publication The Knot, which also bills itself as top authority on all things wedding, published its annual report, breaking down the average cost of a wedding in various cities, regions, and states in the United States. Not surprisingly, the general location can mean a difference of more than $60,000. The average wedding in Utah cost $15,257, while a ceremony in Manhattan had a final average price tag of $76,328. 24/7 Wall St. reviewed the most expensive places to host a wedding.

Click to see the places where weddings are the most expensive

The Knot’s report broke down price differences not just by region, but also by individual items. Such items include the costs of decorations, transportation, the cake, and the hiring of various staff such as photographers, the entertainment, and the ceremony officiant. These individual costs also vary by region, depending on what is available, but by far the biggest cost was the reception venue. On average, booking a venue amounts to nearly 45% of the entire wedding bill. The next largest expense is the reception band, at 11.5%.

In the most expensive places to host a wedding, while the venue represented a disproportionate percentage of the total cost, most of the other costs were also among the highest in the country. There were some exceptions, though. The San Francisco Bay Area apparently has very cheap bands available to play at receptions, and wedding planners are among the least costly in the country in Rhode Island. For the most part, however, if couples live in an expensive place and choose to host a wedding there, everything is going to cost more. The reason for this is likely higher regional costs of living in these places. For the locations with available data, all had higher than average costs of living.

The Knot 2014 Real Weddings Study surveyed the participants of thousands of weddings around the country. The cost estimates for each region are based on the average prices for each expense. In the New York metropolitan area, 24/7 Wall St. only listed the most expensive wedding location in the region — Manhattan — despite the fact that parts of the surrounding areas in New York and New Jersey are also in the top 10. 24/7 Wall St. also reviewed 2012 regional price parity (cost of living) from the Bureau of Economic Analysis and 2013 median household income from the U.S. Census Bureau’s 2013 American Community Survey.

These are the most expensive places to get married.