While Milwaukee did not at first attract black Americans from the South during the Great Migration, many began moving to the city in the 1960s just as manufacturing jobs began disappearing. 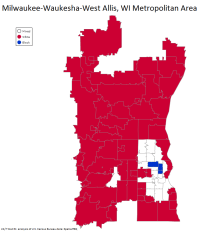 According to the New Republic, “This left almost no time for the city to develop a black middle class or a leadership elite.” Perhaps as a result, more than half of the city’s population lives in a zip code where at least 80% of residents share the same skin color. Of the area’s roughly 80 zip codes, three are home to nearly 25% of the city’s black population. The median household income in two of these zip codes is just $22,000. By contrast, a typical white household earns $62,697.

Milwaukee’s segregation issues go well beyond housing patterns. On average, three-quarters of all people that a white person sees on the street in the Milwaukee metro area are white, and 60% of people a black person sees are black, both indicating among the highest levels of isolation from other racial groups of metro areas reviewed.

With 51.9% of Detroit residents living in zip codes where the vast majority of residents share the same skin color or ethnicity, the area is the second most segregated metropolitan area in the 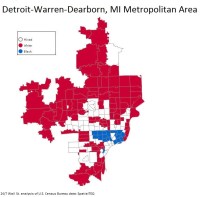 Poor socioeconomic measures are often associated with severe segregation. A typical black household earns just $30,935 annually, more than $4,000 lower than the comparable national figure and nearly $30,000 below white households median income of $59,307. And while Detroit’s unemployment rate has come a long way from its high of 17.2% in June 2009, more than 15% of black residents were unemployed in 2013, double the white unemployment rate of 7.6%.

ALSO READ: How Obamacare Increased Insurance Coverage in Each State

With more than 55% of its population living in homogeneous zip codes, the Cleveland metro area is the most segregated urban area in the country. Of the roughly 100 zip codes in the area, 63 are

predominantly white and are home to nearly 70% of Cleveland’s white population. The metro area’s black population is similarly segregated, with 30.9% concentrated in just six zip codes.

Segregation by income is also a problem in Cleveland. In February, the Martin Prosperity Institute at the University of Toronto ranked the Cleveland metro area number one in income segregation among large metro areas. Median household income in just one of the primarily black zip codes in the area is greater than $24,000. By contrast, median income among white households in the area is nearly $57,000. Low incomes may be the result of a sluggish labor market. In 2013, 20.2% of black Cleveland residents were unemployed, the highest rate among large metro areas and nearly four times the white unemployment rate of 5.4%.