More affluent — often white — residents often move from the inner cities to the suburbs, leaving poorer — often black and other minority — residents in urban areas. In Atlanta, many white residents have continued this pattern of outward migration, filling more rural areas further from the city center. Consequently, black families have moved into the vacated neighborhoods, and as of 2010 87% of Atlanta’s black families lived in Suburbs. While suburban living is not often associated with inequality, in cities such as Atlanta it is. Predominantly black Atlanta suburbs still face the problems that arise from segregation, including relatively low home values and relatively poor funding and achievement in local schools. 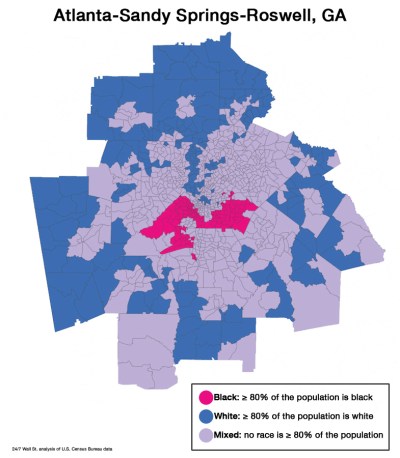 Still, Atlanta has been referred to as the “mecca of the black middle class” — and with good reason. Nearly one-third of the metropolitan area’s 5.5 million residents are black, and the typical black household’s income of $42,975 is in the top 15 incomes for black households among metro areas reviewed. About half of all black families and individuals live in a home they own. While these measures are high compared to black households nationwide, they are still well below the equivalent values for white Atlanta residents. 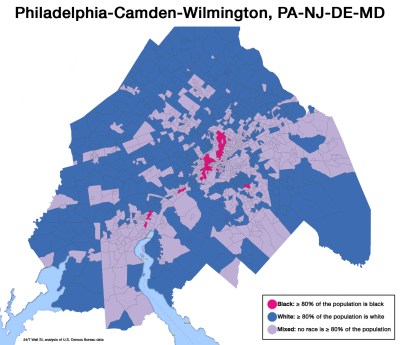 There are numerous ways to calculate segregation levels. One standard measure, which indicates the proportion of black residents who would have to relocate to match the
distribution of whites, pegs the Milwaukee area as the most segregated city in the nation. More than three-quarters of white area residents live in predominantly white 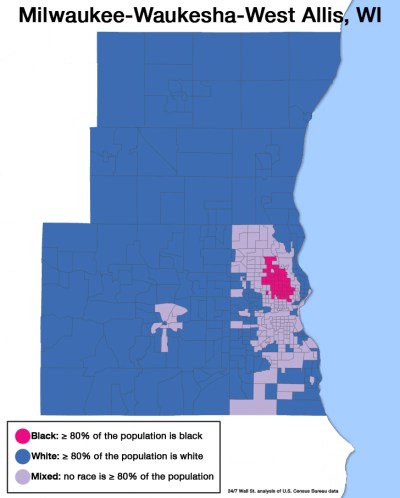 neighborhoods, while more than one-third of black residents live in predominantly black neighborhoods, each well above the respective average shares for large U.S. metros.

All of the metro’s predominantly black neighborhoods are in Milwaukee County, while whites are far more likely to live in Waukesha and Ozaukee. Residential segregation almost always accompanies stark economic disparities. The area’s highest poverty rates — some exceeding 60% — are disproportionately in black neighborhoods, while all of the lowest poverty rates are in predominantly white census tracts.