According to the latest annual intelligence report from civil rights advocacy group the Southern Poverty Law Center, 917 hate groups were active across the nation last year, up from 892 in 2015, and 784 in 2014.

Active hate groups in the United State rose dramatically after former President Barack Obama’s election in 2008. According to SPLC’s count, the number of hate groups surged 800% from 2008 to 2012, when the tally peaked at 1,360 groups. Obama’s race likely led to the hate group spike in 2012. SPLC’s observations suggest the promotion of far-right radicalism in Trump’s campaign rhetoric led to the more recent rise in hate crimes.

Click here to see the 10 states with the most hate groups.

In an interview with 24/7 Wall St., Mark Potok, senior fellow at the Southern Poverty Law Center, said, “Trump’s election has been absolutely electrifying to the radical right.” Over 1,000 hate crimes were counted in the month after Trump’s election, and Trump’s slogan “Make America Great Again” was named by perpetrators in well over a third of those crimes.

According to Potok, Trump and his administration’s rise to power reflects the rise of right wing populism, a movement pitted against government elites and defined by the belief that the United States is a country created by and for white people. However, he added, these sentiments, and the consistent rise in active hate groups, can be traced to longer-term trends — namely, globalization and its consequences for the U.S. economy (the decline in the manufacturing industry in particular) and to population makeup (immigration patterns).

The rise in immigration in the 1910s preceded the unprecedented growth of the Ku Klux Klan in the United States. In 1910, foreign-born Americans comprised 14.7% of the population, and by 1920 that figure was still relatively high, at 13.2%. By 1925, the Ku Klux Klan had grown to some 4 million members, the largest in U.S. history, and following a number of quota-based and other racist immigration policies, the flow of immigrants to the U.S. declined. 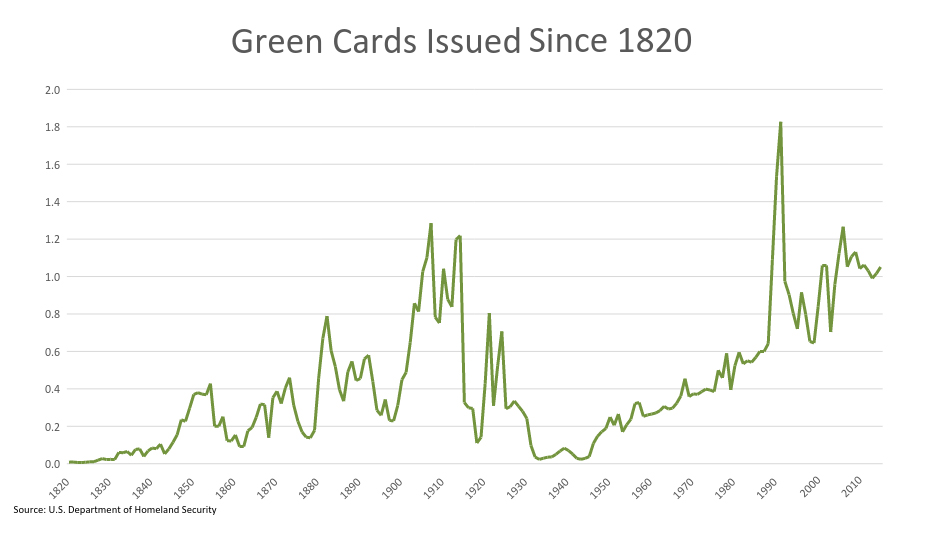 The surge in hate group activity in recent years also coincides with the growth of the U.S. foreign-born population, which at 13.2% of the population as of 2015 is approaching 1910 levels.

Because the flow of new immigrants tends to be greater in areas with already large foreign-born populations, and because individuals seeking residency in the United States tend to avoid areas where they are not welcome, many states with relatively high numbers of hate groups do not have large foreign-born populations. Foreign-born individuals make up 5% or less of the populations in eight of the 10 states with the most hate groups, and on this list, no state’s immigrant population exceeds the national average share of 13.2%.

Potok explained that the ongoing process of globalization brings a range of other economic consequences, including “forty years of falling manufacturing wages, historic levels of income inequality,” and unlike in the past, “the absolute necessity of having a college degree if you expect to be supporting a family on your wages.”

Few states have been spared from the decline in manufacturing jobs in recent years, and plenty of states with struggling manufacturing sectors are not home to high — and often rising — numbers of active hate groups. Still, for states with the highest concentrations of organized hatred, economic decline is likely tied to hate sentiments. In five states on this list — Alabama, Arkansas, Kentucky, Mississippi, and Tennessee — the manufacturing sector is relatively large, with shares of employment in the sector in the top 10 compared with other states. But these are also states where manufacturing employment has fallen dramatically in the past decade. In Arkansas, manufacturing employment dropped by 22% between 2006 and 2015.