Our nation’s capital and, for many people, the physical representation of unity and freedom in the United States, Washington D.C. is also one of the most segregated cities in the United States. About one-quarter of the population is black, a relatively large share compared to both 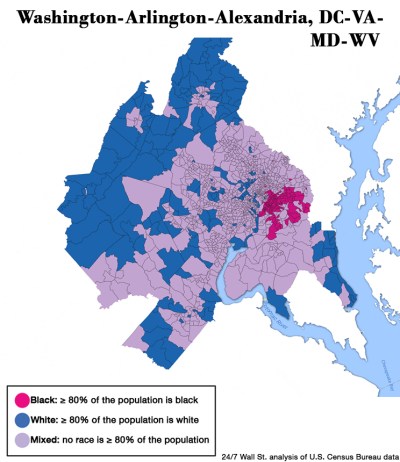 Source: Evan Comen / Google Fusion Tables
the country as a whole and most metro areas. Some 13.8% of the population of the 100 largest metropolitan areas in the country is black.

Segregation in Washington largely occurs along the Anacostia River, with many poor, black neighborhoods concentrated in the southeastern parts of the city. Wealthier white communities, meanwhile, are situated in surrounding suburbs such as Arlington, Virginia and Frederick, Maryland. Dozens of tracts in Southeast Washington D.C. have less than 1% white residents, and many tracts in the northeast have less than 1% African American residents.

Unlike other highly segregated, large cities like Washington, D.C., Dayton has a relatively small nonwhite population. More than 77% of the Ohio metropolitan area’s 800,000 residents are white. Of those, 467,000, or over three-quarters, live in mostly white neighborhoods. Also, about 13% of the white population is impoverished. Of the area’s relatively small black population, about 30% live in predominately black neighborhoods, and almost 35% live in poverty. In all, 62.8% of Dayton’s population lives in a neighborhood that primarily consists of their respective race, one of the largest shares of segregated residents nationwide. 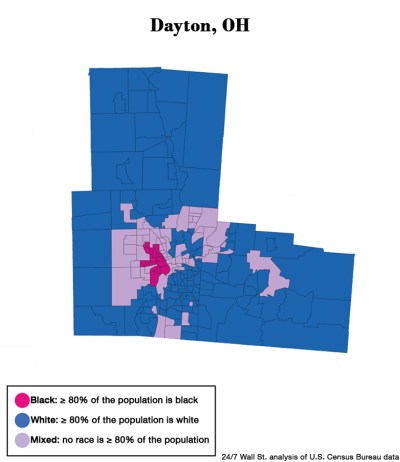 In 1966, some of the worst race riots in the Dayton’s history were likely caused by the city’s discriminatory housing policies that resulted in the heavy racial segregation that persists today. As school systems nationwide were ordered to desegregate, Dayton was the last Ohio city to be awarded racially unitary status — that is, the federal government no longer found its schools segregated based on race. Still, although the city no longer enforces segregation by law, the Dayton school system remains largely segregated today.

Atlanta is one of the more segregated major metropolitan areas in the United States, as about 31% of the area’s black population 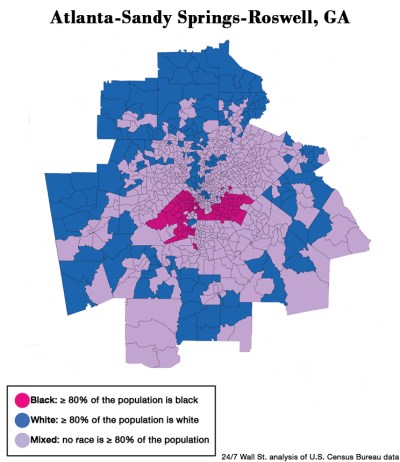 Source: Evan Comen / Google Fusion Tables
lives in a predominantly black neighborhood. However, compared to many racially segregated cities, while inequalities still exist, outcomes are not as bad for Atlanta’s black residents as they are for black residents in other cities. Atlanta has one of the highest African American adult educational attainment rates, one of the highest black homeownership rates, and one of the higher median incomes among large metropolitan areas for black households. Atlanta’s African Americans still fall well behind the metropolitan area’s white residents by all these measures, however.

One of the most immediate and severe consequences of segregation in American cities is the ongoing differences in educational outcomes. Because property taxes are a major component of local school funding, regional income is one of the largest determinants of school quality and educational attainment.

Like in most of the country, there is a large income gap along racial lines in Baton Rouge. 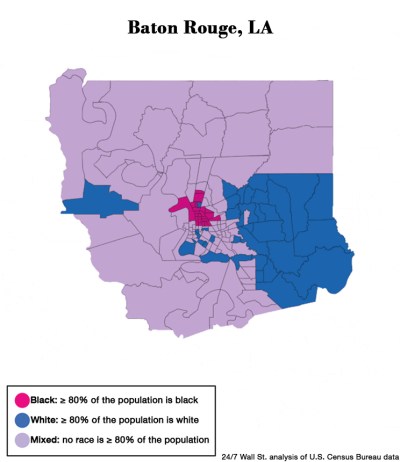 Source: Evan Comen / Google Fusion Tables
The typical black household in the Louisiana capital earns $34,914 a year, nearly half the $65,842 the typical white area household earns. Because Baton Rouge is one of the most segregated metropolitan areas in the United States, this translates to a significant disparity along racial lines in educational outcomes. The high school education attainment rate among black metropolitan area adults is just 80.9%, roughly 10 percentage points less than the 90.8% white high school education attainment rate — one of the larger disparities of any major metro area.