Philadelphia has a long history of racial violence and segregation. One of the first race riots of the civil rights era erupted in the city in August 1964 after two police officers forcibly pulled a black woman from her car. The riots resulted in over 700 arrests and 200 cases of property damage. 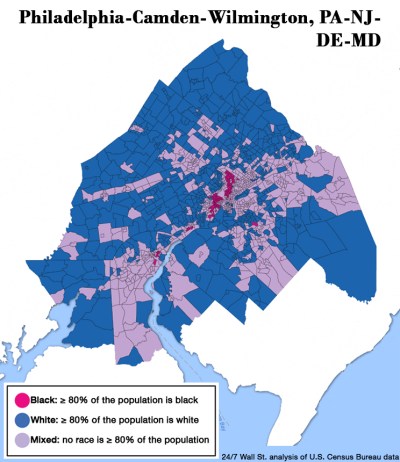 Source: Evan Comen / Google Fusion Tables
In 1985, the Philadelphia Police Department firebombed a house containing some members of a racial activist group after one of its members had shot and killed a police officer. In total, 11 people were killed, and the resulting fire destroyed 61 homes.

Today, about 43% of the City of Brotherly Love’s population lives in a racially homogeneous neighborhood, about 10 percentage points higher than the average across the 100 largest U.S. metropolitan areas. Of the city’s black population, 15.6% both earn poverty wages and live in high poverty neighborhoods, compared to less than 1% of the city’s white population.

Across the nation’s 100 largest metropolitan areas, slightly less than 1 in 3 residents live in a neighborhood where at least 80% of the population shares their race. In Milwaukee, 56.6% of residents live in such neighborhoods. The city’s quarter million black residents, which make up about 16% of the metro area’s population, live largely in Milwaukee County, while the metropolitan area’s majority-white population lives in the city’s suburbs, in Waukesha, Ozaukee, and Washington counties. 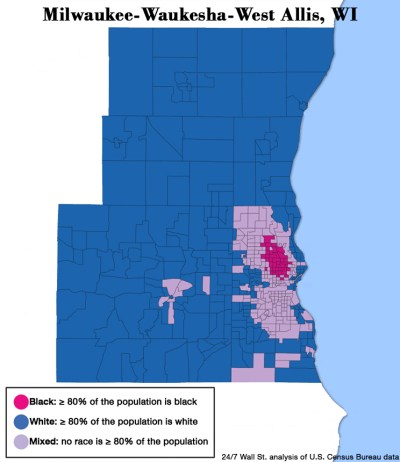 One of the most famously disastrous cases of racially segregated government housing happened in St. Louis. In the mid-1950s, the federal government constructed several dozen 11 story middle-class public housing towers in two projects that would collectively be called Pruitt-Igoe. For a time, the towers were segregated — blacks lived in Pruitt, while white families lived in Igoe. After racial discrimination was outlawed and black and white residents were allowed to live together in the combined Pruitt-Igoe, most whites moved out, and a lack of care led the structures to fall into disrepair. 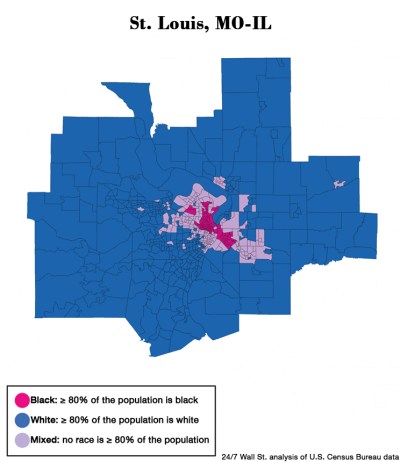 Source: Evan Comen / Google Fusion Tables
Both crime and vacancy rates rose, until the towers were demolished and all remaining tenants were relocated.

Richard Rothstein, researcher for the Economic Policy Institute, says that Pruitt-Igoe and other segregated public housing projects in St. Louis contributed to current racial inequalities in the St. Louis area, including the substantially higher educational attainment rates among the city’s white residents, as well as a poverty rate among black residents that is three and a half times higher than among the white population.

Birmingham is often considered one of the most important cities in the development of the American civil rights movement during the 1960s. Martin Luther King Jr. focused his efforts to end segregation throughout the United States in Birmingham, and the city was the site of numerous sit-ins, marches, and nonviolent protests. The highly publicized violence with which peaceful protesters were met, as well as the bombing of the 16th Street Baptist Church that killed four young girls, galvanized the movement and caused it to spread throughout the country. 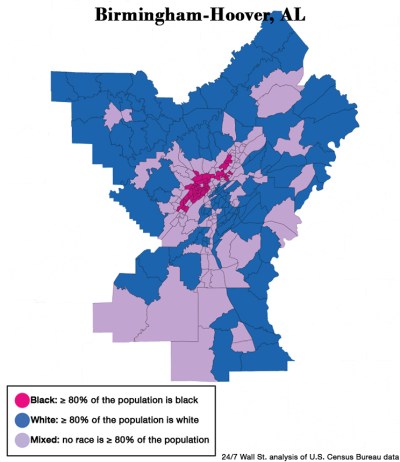 Source: Evan Comen / Google Fusion Tables
Given the city’s historic significance in the civil rights movement, it is especially regrettable to see how how segregated the city is today. Over half of the city’s 1.1 million residents live a racially homogeneous neighborhood that shares the same race as them. As is the case across the country, the city’s black population is far more likely to be poor, and far less likely to be employed and well educated, compared to the city’s white population. Less than 1% of the metro area’s white residents both live in poverty and live in neighborhoods where a large share of the population is also poor, compared to more than 15% of Birmingham’s black residents.