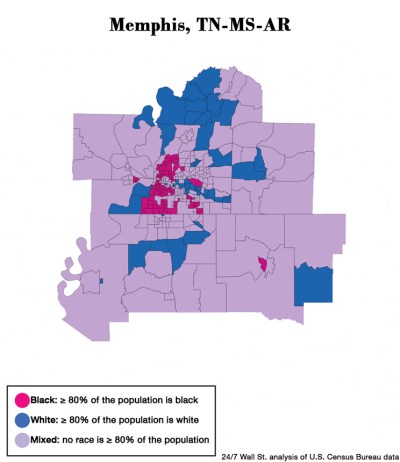 There are many negative consequences of living in high-poverty neighborhoods that extend beyond the basic struggles of poverty. Those living in areas where a bulk of residents earn poverty wages are less likely to have access to educational and employment opportunities and are far more likely to remain in poverty. In Memphis, extreme poverty affects African Americans far more than white residents. Just 2.3% of white Memphis residents live in neighborhoods where are least 40% of the population is poor, compared 20.5% of the black population.

Jackson, Mississippi residents who are black are far more likely to live in predominantly black neighborhoods than African Americans in nearly every other U.S. metro area. 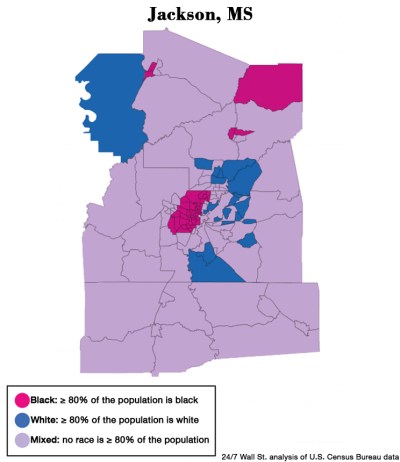 Source: Evan Comen / Google Fusion Tables
The metro area’s black population is concentrated in downtown neighborhoods within the city proper. While in many of the most segregated U.S. metro areas the black population is far worse off economically it is nationwide, Jackson is an exception in many ways. For example, only 12.8% of the area’s black workers are unemployed, the third smallest black unemployment rate on this list. Additionally, Jackson’s 53.9% black homeownership rate is the highest of any major metro area. However, Jackson also has the highest white homeownership rate among large metropolitan areas, which, at nearly 80%, dwarfs that of the African American population.

Attracting many immigrants into America in the 19th and 20th century, the Chicago metro area has long had one of the most diverse populations of any U.S. city. 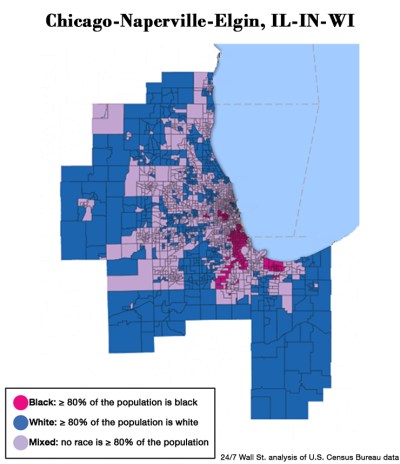 Source: Evan Comen / Google Fusion Tables
In recent history, however, exclusionary zoning, white flight, and racial prejudice have intensified segregation in the city and worsened economic outcomes for minorities. Today, more than 50% of all African Americans in Chicago live in neighborhoods in which at least 4 in 5 residents are also black, the second largest share in the nation.

While 7.2% of white residents in Chicago live in poverty, 29.0% of black residents do. The black poverty rate is more than four times the white rate and is the second largest poverty disparity between blacks and whites of any metro area.

Once the fourth largest city by population and wealthiest by income per capita, Detroit’s economic decline over the past several decades has been one of the deepest of any U.S. city. The population of Detroit’s city proper today is approximately one-third what it was at its 1950 peak of 1.8 million people, and it continues to decline at a near nation-leading pace. 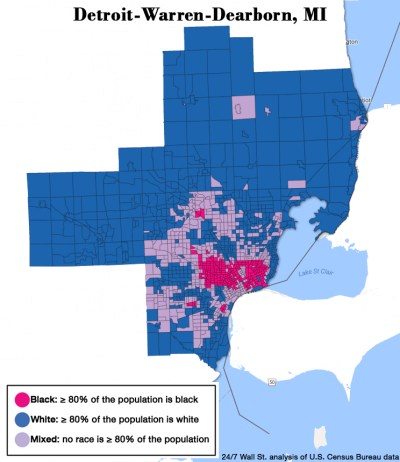 Source: Evan Comen / Google Fusion Tables
As wealthier, white residents left the city in search of jobs and better living conditions, many poorer, black residents could not afford to move and stayed in the declining city. Such white flight intensified segregation in the city and worsened economic outcomes for minorities. Segregation in the city is delineated by 8 Mile Road, a beltway that acts as a physical and cultural divide between the city’s wealthy, white population and its poor, African American communities. Today, 55.3% of Detroit’s African American population lives in neighborhoods where at least 4 in 5 residents are black, the largest share of any U.S. metro area.