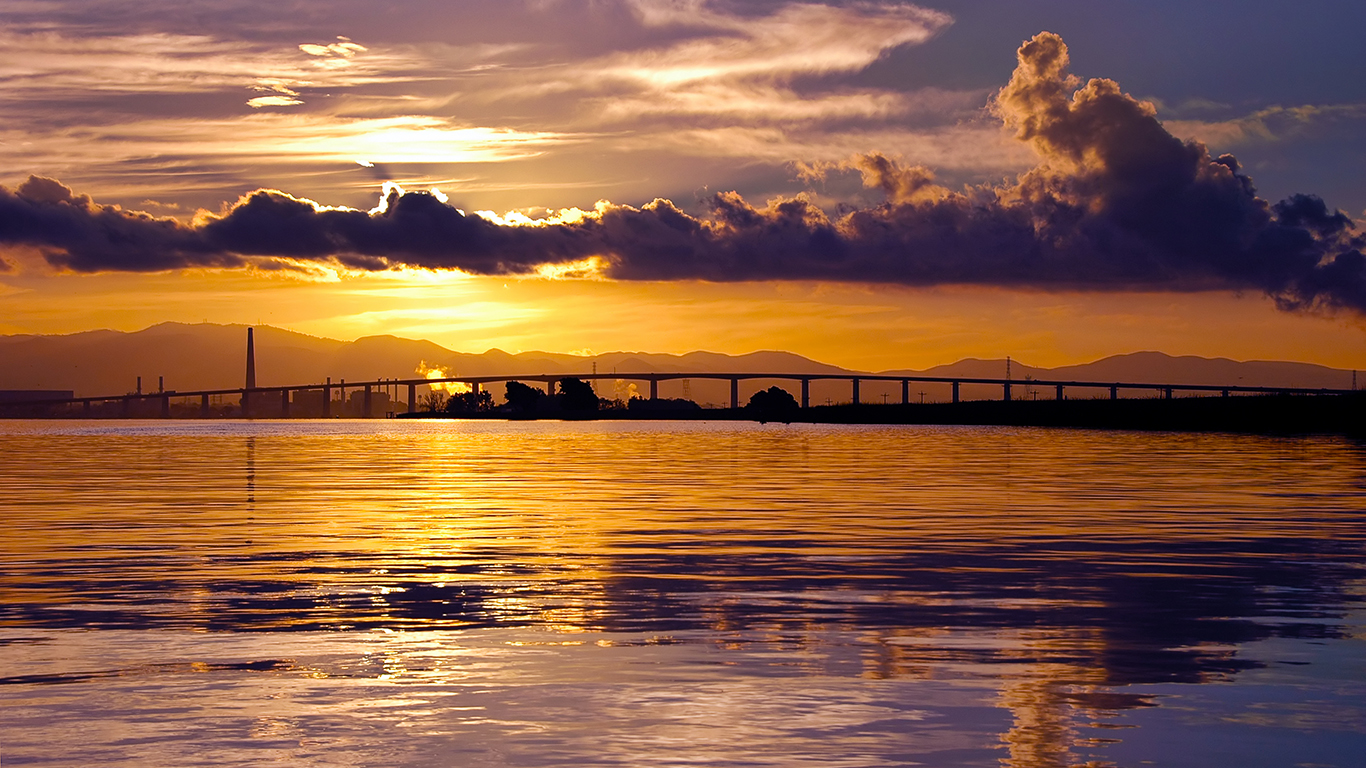 Antioch is a small city of roughly 110,000 residents approximately 35 miles from Oakland and 45 miles from San Francisco. An estimated 6.9% of Antioch commuters use public transit, a larger share than the 5.1% national average. Starting in Spring 2018, Antioch commuters will be able to travel to San Francisco on a new rail line operated by Bay Area Rapid Transit, one of the highest rated transit authorities in the country. Within Antioch, Tri-Delta Transit operates one of the most efficient bus systems of any city. The Tri-Delta Transit system experiences just 3.1 breakdowns per 100,000 miles, a fraction of the 11.6 breakdowns per 100,000-mile national figure. Vehicles used in Antioch public transportation are also relatively new. The average vehicle used in the Tri-Delta Transit fleet is just 5.8 years old, compared to 8.3 years nationwide. 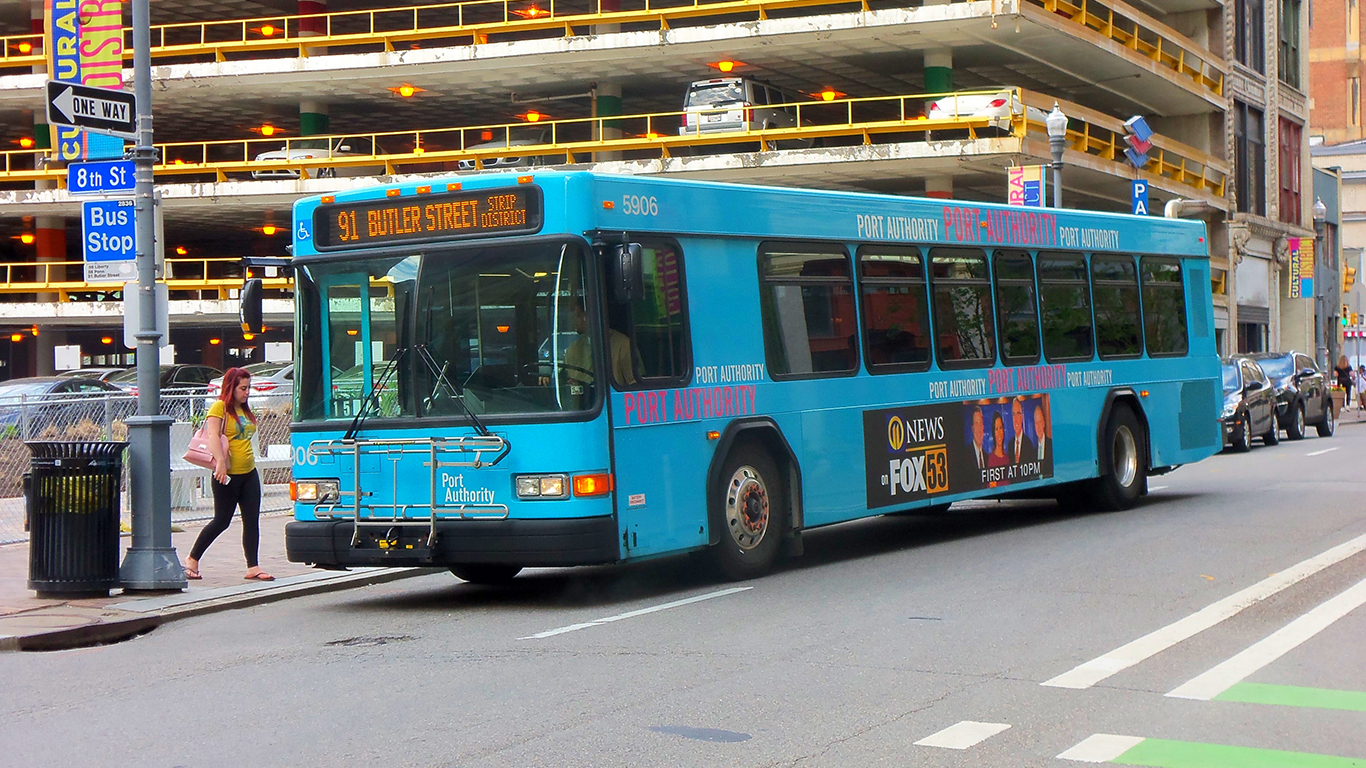 Public transit in Pittsburgh ranks as second best in Pennsylvania and among the best of any city nationwide. The Port Authority of Allegheny County, the most widely used transit system in the city, primarily operates buses and a light rail transit system. Generally a newer transit system than that of the larger Southeastern Pennsylvania Transportation Authority’s in Philadelphia, Pittsburgh’s fleet is only about 8 years old on average compared to 14 years in Philadelphia. Partially as a result, the vehicles used in Pittsburgh’s public transit system are likely less susceptible to breakdown. Systemwide, there are only about 12 breakdowns per 100,000 miles traveled in Pittsburgh compared to 17 breakdowns on buses, streetcars, trolleys, and rail lines operated by SEPTA per same amount travelled. 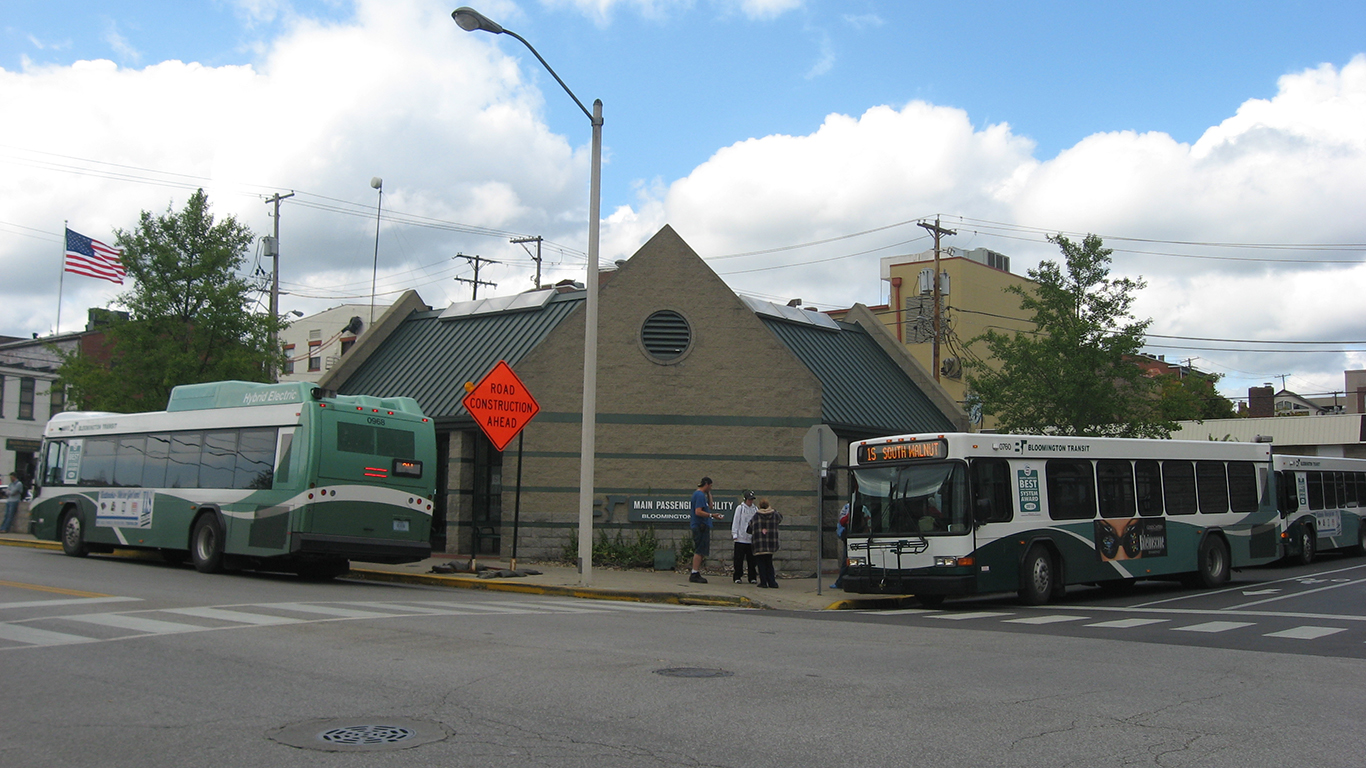 College towns often have some of the best public transportation, as universities are generally responsive to student demand and will often invest in their host city’s transit system to provide the student body with access to the surrounding community. In Bloomington, where 36.2% of the population is enrolled in college or graduate school — many at Indiana University — 5.3% of commuters use public transit, slightly more than the national average. With free bus fares for IU students and City of Bloomington employees and just a $1 regular fare, Bloomington has one of the least expensive public transportation systems nationwide. Buses operated by Bloomington Transit also have relatively few delays or accidents. There have been just 44 accidents and 46 injuries on Bloomington public transit since 2002, among the least of any city when adjusted for miles driven. 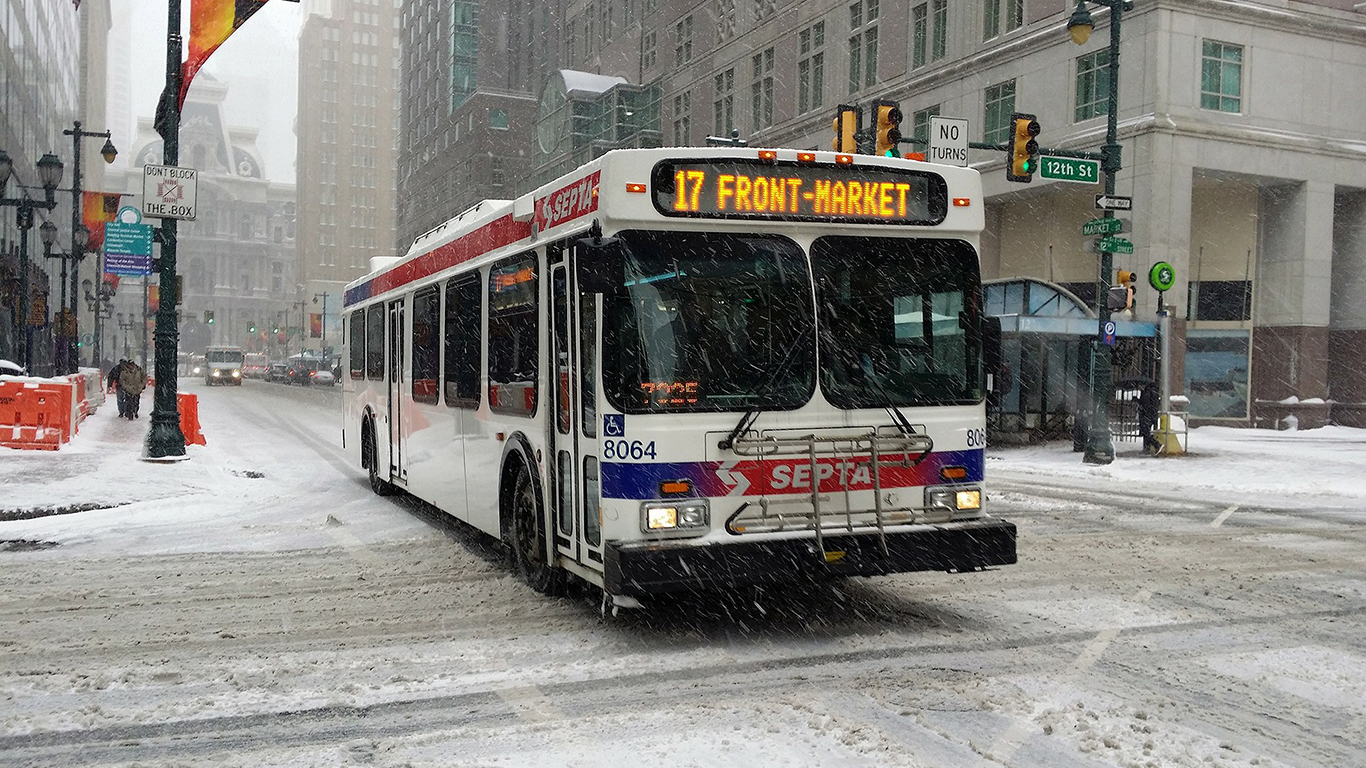 Despite being the most likely transit system to have a collision, derailment, or other security issue in the country, Philadelphia cracks the top 10 best public transportation systems among U.S. metro areas for its comprehensive service and high usage. An estimated 10.5% of Philadelphia commuters use public transit, more than double the national rate of 5.1%. However, ridership may be negatively impacted by a proposal from a group of Pennsylvania House Republicans, which could cut Philadelphia’s transit service by 40% and raise fares by 20% as soon as January of next year. 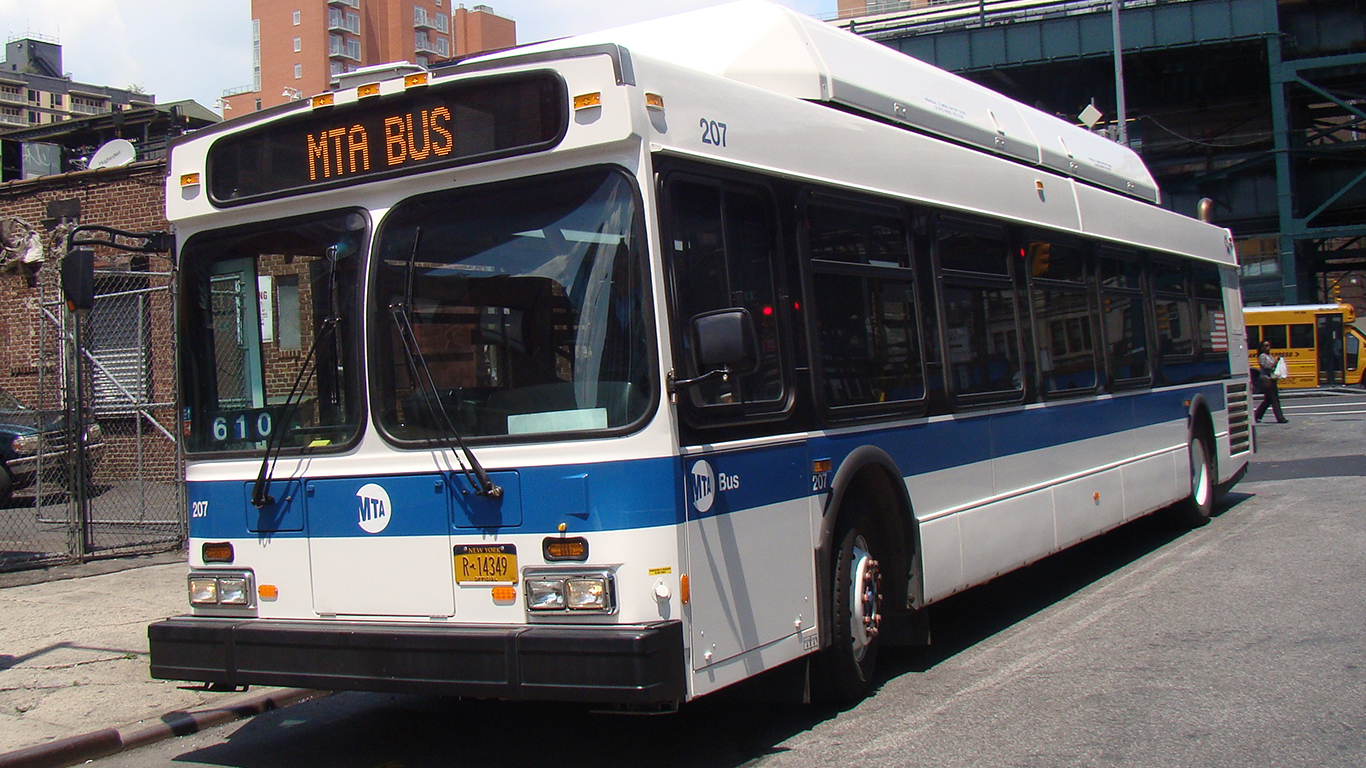 Waldorf is a small census-designated place of roughly 70,000 residents located approximately 30 miles from the Washington, D.C. An estimated 7.6% of commuters in Waldorf public transit, one of the largest shares of any city. Many residents likely commute to Washington, D.C. on a commuter bus operated by the Maryland Transit Administration, one of the highest rated transportation authorities in the United States. Within Waldorf, the Charles County government operates one of the least expensive public bus systems in the country. Regular fare for the bus is just $2 for an all day pass and $1 for a one way trip, with reduced fares available. Customers paid an average of just $0.41 per trip in Waldorf in 2016, nearly the least of any city. Waldorf also has some of the newest transit infrastructure in the country. The average vehicle used in Waldorf public transit is just 5.0 years old, less than the 8.4-year national average.