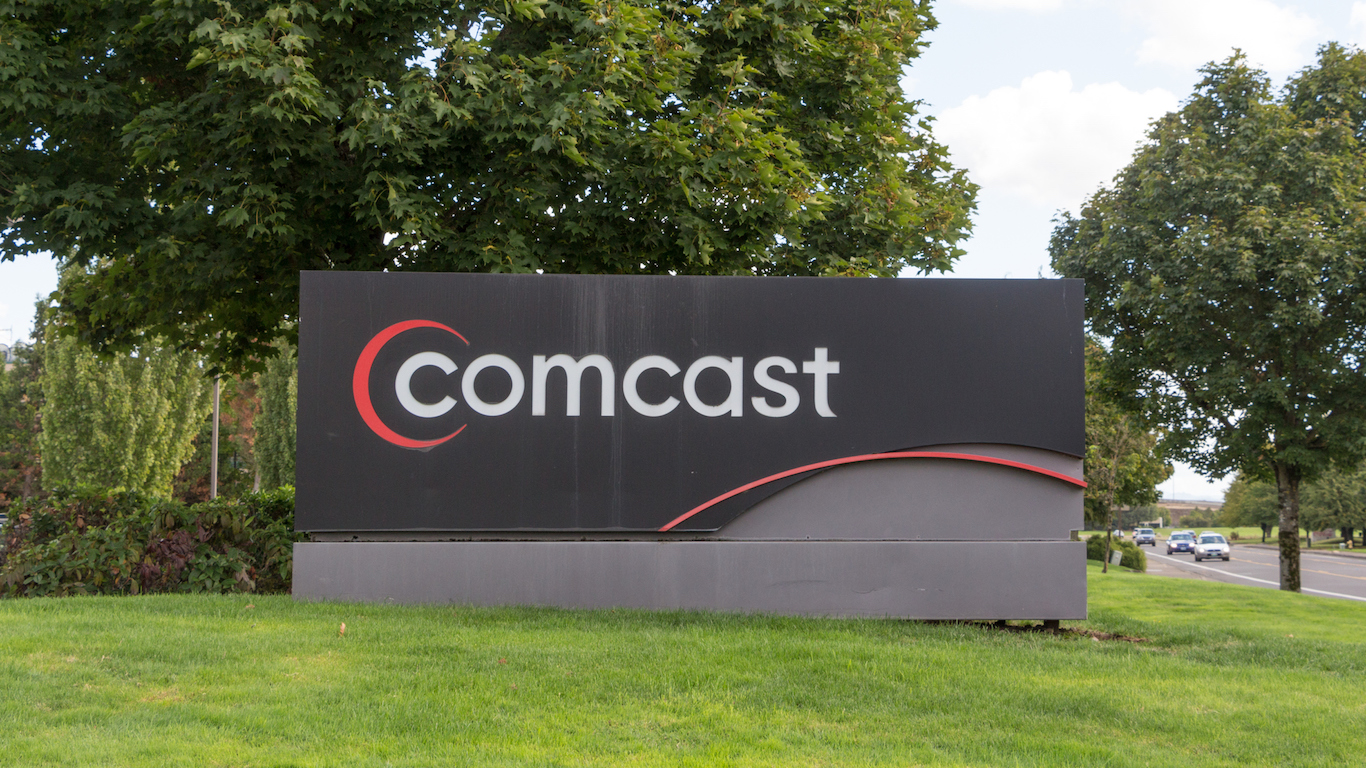 Comcast’s poor standing is not a recent development. The company was rated America’s most hated last year, based on similar metrics. Some 47% of customers who responded to 24/7 Wall St. and Zogby’s customer satisfaction survey reported a negative experience with the company – the largest share among all companies considered. The company was forced to pay a $2.3 million fine in 2016 over allegations that it charged customers for unauthorized services and equipment. 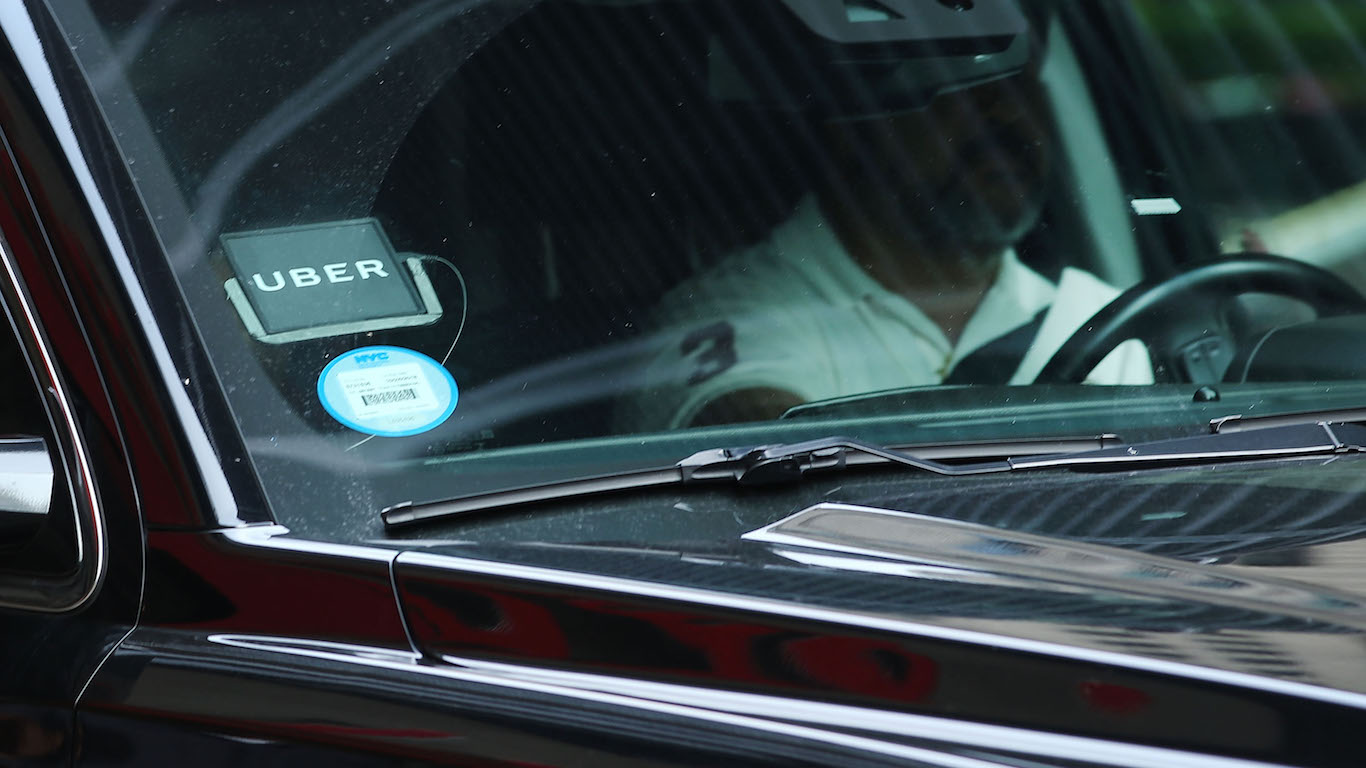 Few companies had a worse year in 2017 than ride sharing app Uber. An essay published by former Uber employee Susan Fowler in mid-February detailed a prevailing culture of sexism and sexual harassment at the company. Less than a month later, a video of then company CEO Travis Kalanick getting into an argument an Uber driver surfaced, prompting him to make a public apology. Uber also faced a number of lawsuits in 2017, including one filed by Alphabet, Google’s parent company, for alleged theft of intellectual property related to self-driving car technology. As a result of the myriad of lawsuits and investigations into sexual harassment, 13 company executives resigned in the first half of 2017 alone, including the June departure of Kalanick.

The company’s trouble’s did not end with Kalanick’s departure. A Wall Street Journal article published in September revealed the company is the subject of an FBI investigation for illegally interfering with rival company Lyft. Later that month, the company lost its license to operate in London due to a lack of corporate responsibility. 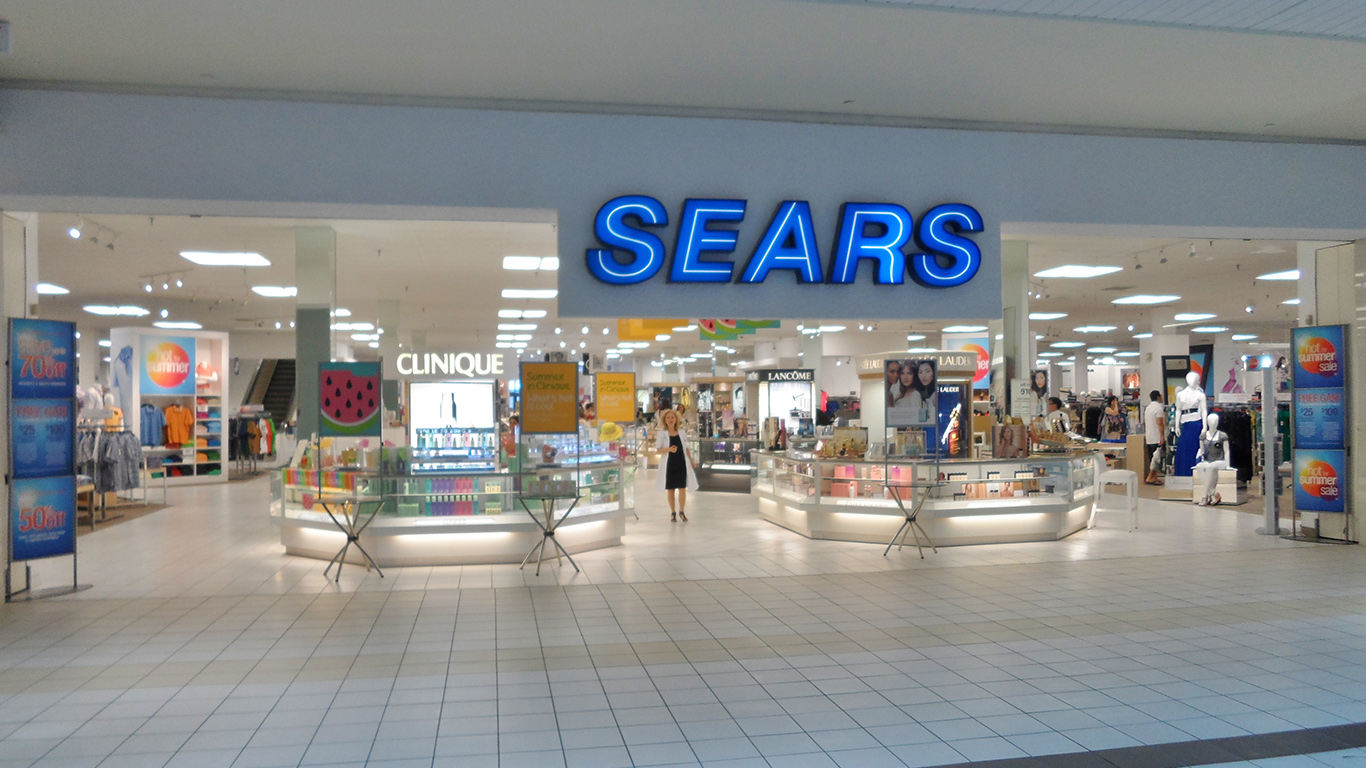 Over one-third of respondents in a Zogby’s poll conducted in partnership with 24/7 Wall St. reported a negative customer experience with Sears, one of the largest shares of any company. Sears also has one of the lowest customer satisfaction scores of any department store in the ACSI. Consumers rate Sears just 77 out of 100, lower than any department store other than Ross and Walmart. Sears’ falling sales are another indication of the company’s declining popularity among consumers. The company reported $22.1 billion in sales in fiscal 2017, less than half its $53.0 billion revenue in 2007. The number of Sears and Kmart stores — both owned by Sears Holdings — in the United States fell from 3,467 to less than 1,300 over that time, and the company plans to close over 100 more stores through the spring of 2018.

Declining revenue and imminent store closures likely do little to boost employee morale. Only 33% of Kmart employees and 28% of Sears employees would recommend the job to a friend, according to Glassdoor reviews. 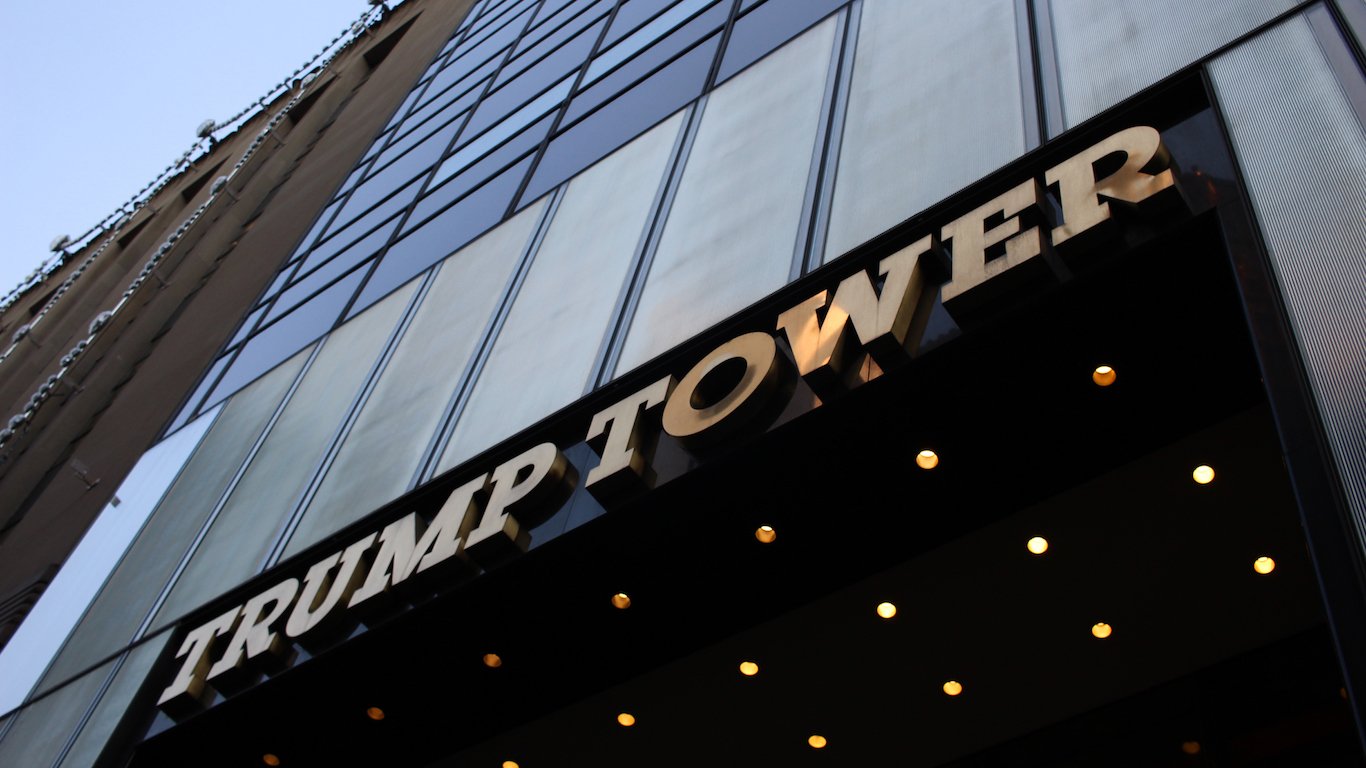 Donald Trump is the least popular president in the history of the United States — at least at this point in his presidency. Trump’s approval rating sat at only 35% at the end of December. Before Trump, the lowest approval rating of any president one year into his term was Ronald Reagan’s 49%.  For many of the majority of Americans who disapprove of the president, anything bearing the Trump name is equally disliked.

The commander in chief is also the former head of The Trump Organization, a conglomerate controlling golf courses, a hotel chain, international real estate investment, and a winery. The company is now under the microscope of Democratic lawmakers. Earlier this year, 17 Democratic members of the Oversight and Government Reform Committee signed a letter addressed to the panel’s Republican chairman urging the organization to further investigate potential conflicts of interest between Trump’s corporate interests and his obligations as a public servant. 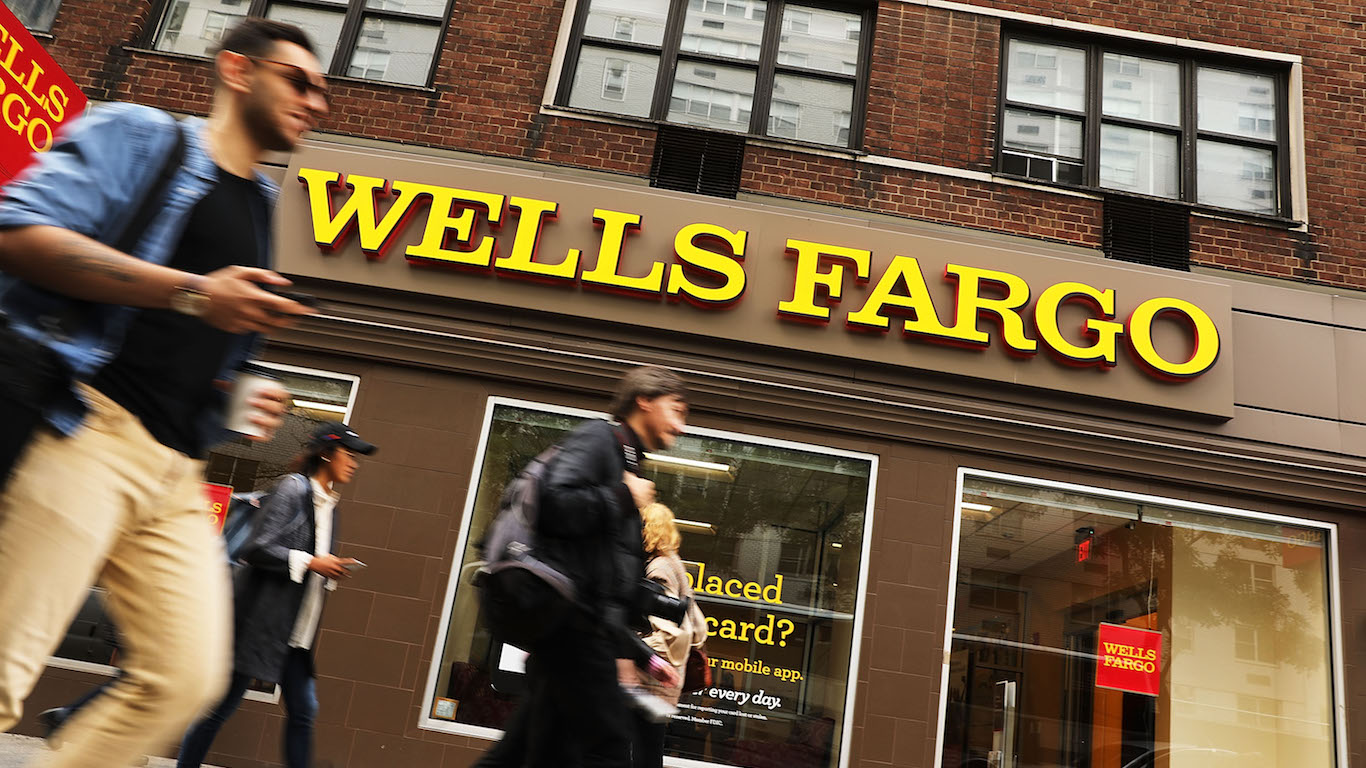 Following revelations that bank employees created millions of fake accounts without customers’ knowledge in an effort to meet quotas handed down from the top, John Stumpf stepped down as Wells Fargo’s CEO in 2016. The company’s problems related to the scandal did not stop there. In mid-2017, the bank revealed that the fraud was more pervasive than initially thought, and that employees may have created as many as 3.5 million accounts, up from the 2.1 million reported in 2016.

Compounding the public relations crisis, the bank was also found to have charged over half a million customers for car insurance they did not ask for and did not need. As many as 20,000 of those customers may have had their vehicles impounded for defaulting on the unnecessary insurance charges. Further, in October 2017 news broke that the bank charged over 100,000 customers late fees on mortgage payments when the delays were in fact the fault of the bank. Wells Fargo ranks as the worst American bank with a rating of just 74 out of 100 on the American Customer Satisfaction Index — well below the 81 industry average.