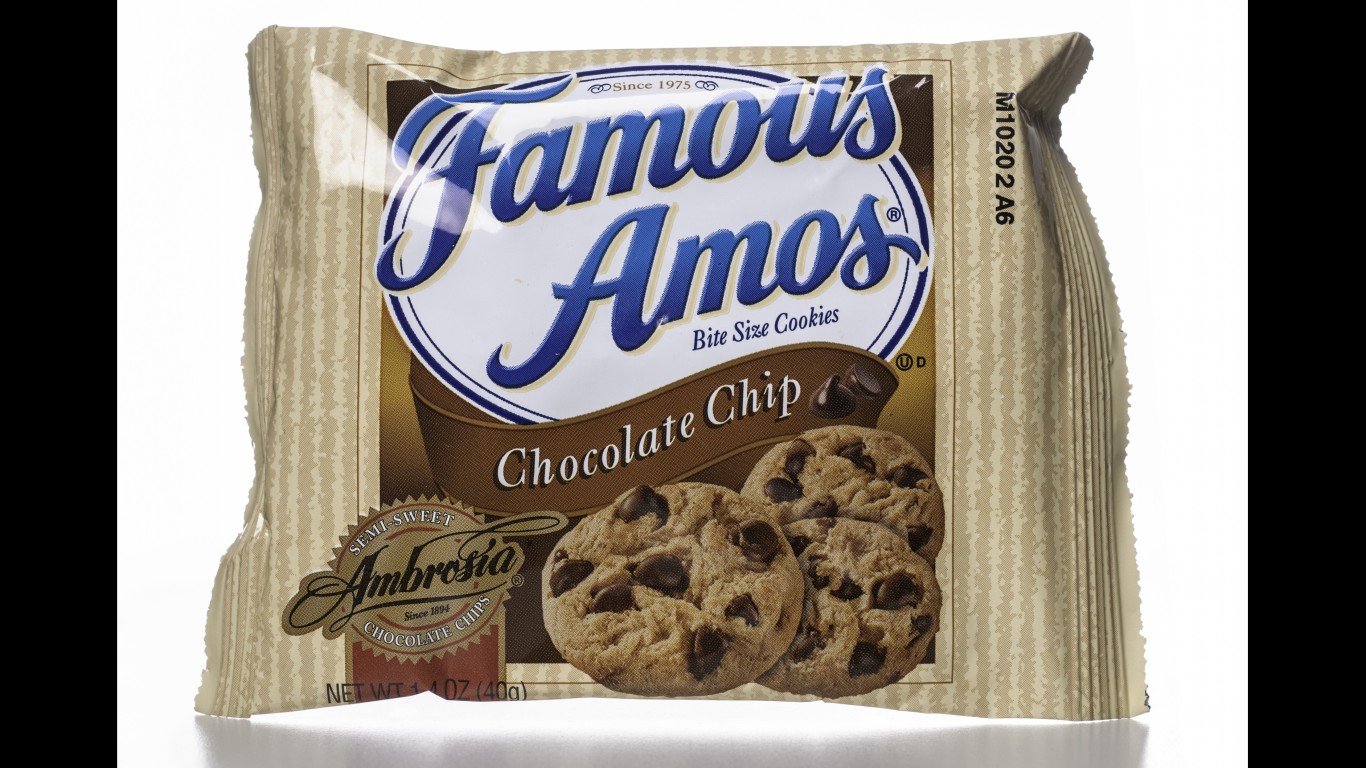 Wally (Famous) Amos was a talent agent at the William Morris Agency in New York City — he signed Simon & Garfunkel and represented the Supremes and Dionne Warwick, among others — but he left the business in 1967 and moved to Los Angeles. After attempts to set up his own management business there failed, he came up with another plan. Using his schooling — he had studied culinary arts at a vocational high school in New York for a couple of years — and his Aunt Della’s home-baked chocolate chip cookies, he thought he’d try to make a living with his version of her recipe.

With backing from Marvin Gaye and Helen Reddy, friends from his agency days, he opened a cookie stand on Sunset Boulevard. He promoted his brand with images of himself, smiling and sporting a panama hat and embroidered shirt, and did $300,000 worth of business in his first year. By 1982, revenue had reached $12 million. Amos wasn’t an accomplished businessman, though, and was forced to sell off part of his company in 1985. In 1988, the company lost $2.5 million, and in 1998, after several interim owners, Famous Amos was bought by Keebler. 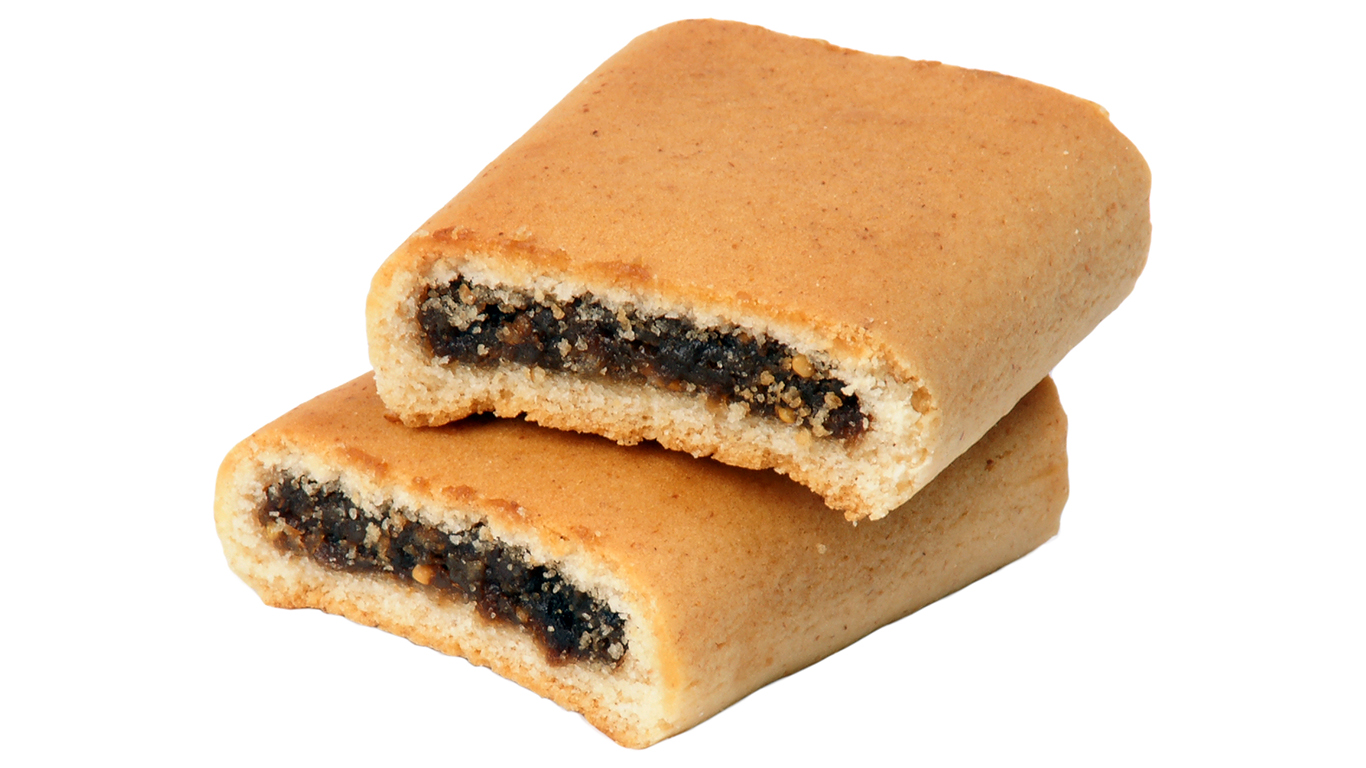 Actually, Fig Newtons aren’t called “Fig Newtons” anymore, though that’s how many people still think of them. The idea of fig jam enclosed in a soft, cake-like dough dates back to the late 19th century, but there are competing claims as to who invented the cookie. One version of the story credits an Ohio-born cookie maker named Charles Roser, said to have invented a machine in Philadelphia around 1891 that allowed the jam to be funneled into the dough as it was made. Another version credits Floridian James Henry Mitchell with developing the technology. It is also possible that Roser came up with the idea for the cookie, while Mitchell created the machine that could mass-produce it.

In any case, Roser sold the recipe to the Kennedy Biscuit Company of Cambridgeport, Massachusetts, which began producing Fig Newtons — or just Newtons, as they were originally called — almost immediately. The cookie was apparently named not for mathematician and physicist Isaac Newton, as is sometimes said, but for the Boston suburb of Newton. (The company already had cookies with other Boston-related names, including Harvard and Beacon Hill.)

In 1898, when the National Biscuit Company (later abbreviated to Nabisco) was formed, it took over the Kennedy Biscuit Company and its cookies. Newtons were renamed Fig Newtons in acknowledgement of their filling, but in 2012, “Fig” was dropped from the name again because the product was being made with other kinds of fruit besides the original, and also perhaps because the company feared that figs, like prunes, were associated with older people, not the younger market they hoped to capture. 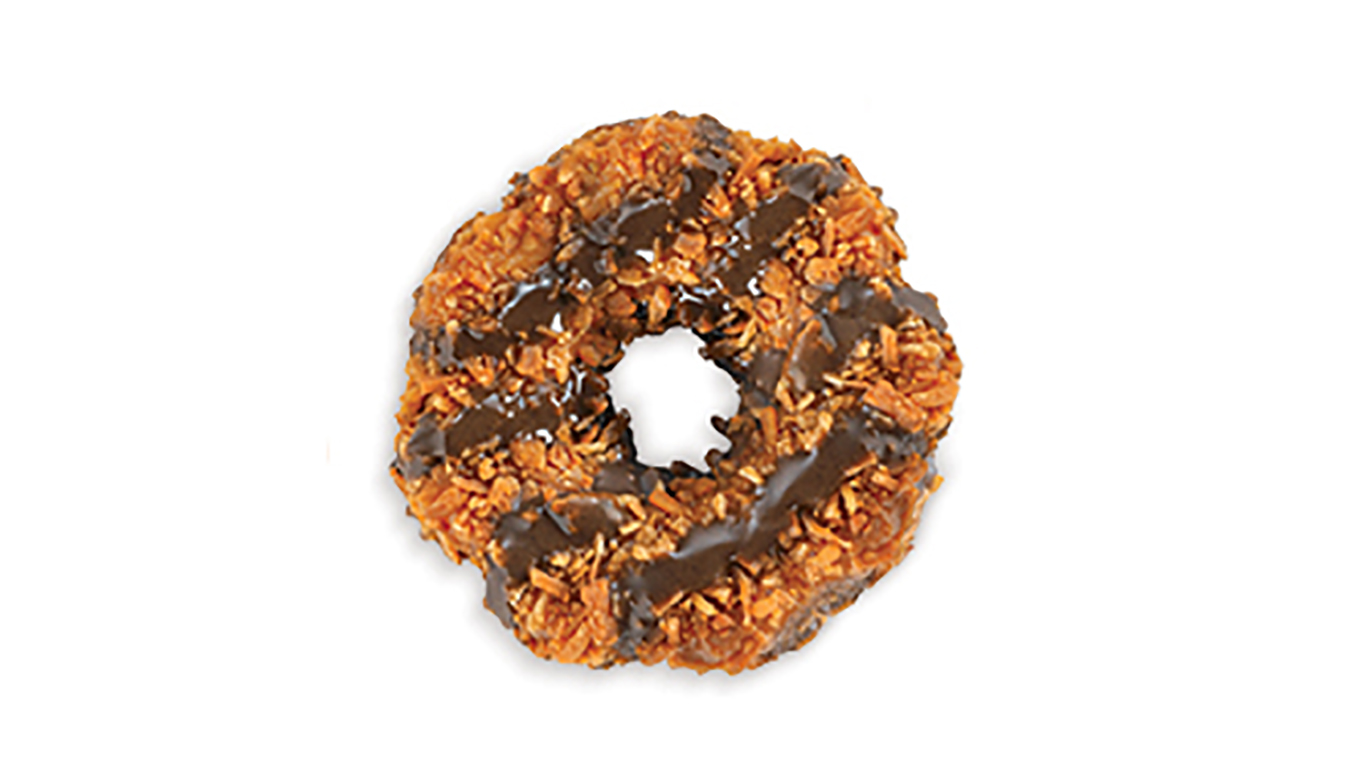 The Girl Scouts first sold cookies, as far as anyone knows, in 1917, when a troop in Muskogee, Oklahoma, baked some to sell in their school cafeteria to fund their projects. In 1935, cookies were first marketed under the Girl Scout label, and the following year, the Scouts signed up commercial bakers to help meet the growing demand. By 1948, some 29 bakeries were producing the cookies. 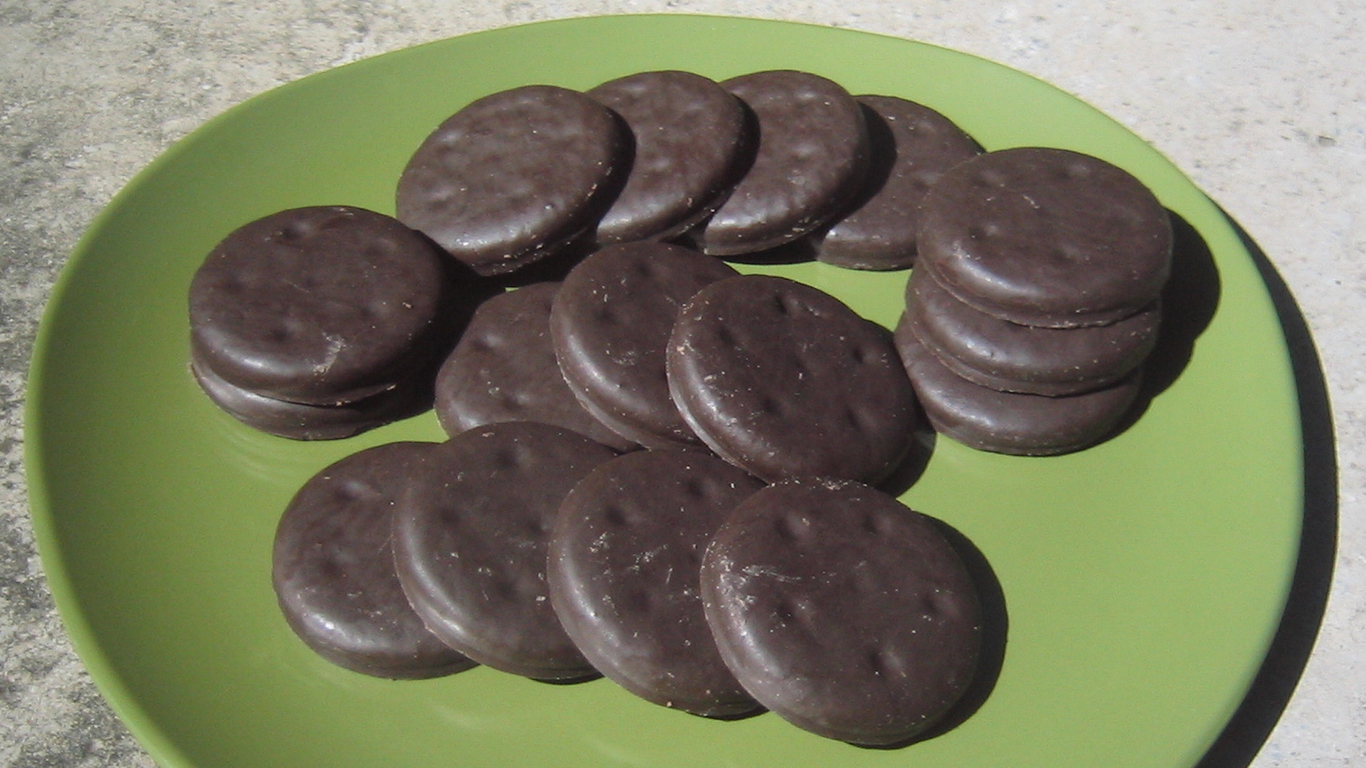 Thin Mints, originally called Cooky-Mints, were introduced to the Girl Scout lineup in 1939. Since then, a Girl Scout historian told Time Magazine, the name has changed to Chocolate Mint to Thin Mint to Cookie Mint to Chocolate Mint to Thin Mints (plural) to Thin Mint and finally back to the plural form. While a number of Girl Scout Cookie varieties go under different names according to which of the two official bakeries produces them (see No. 8), Thin Mints are always Thin Mints. However, the Little Brownie version has a richer, smoother chocolate coating than ABC’s. 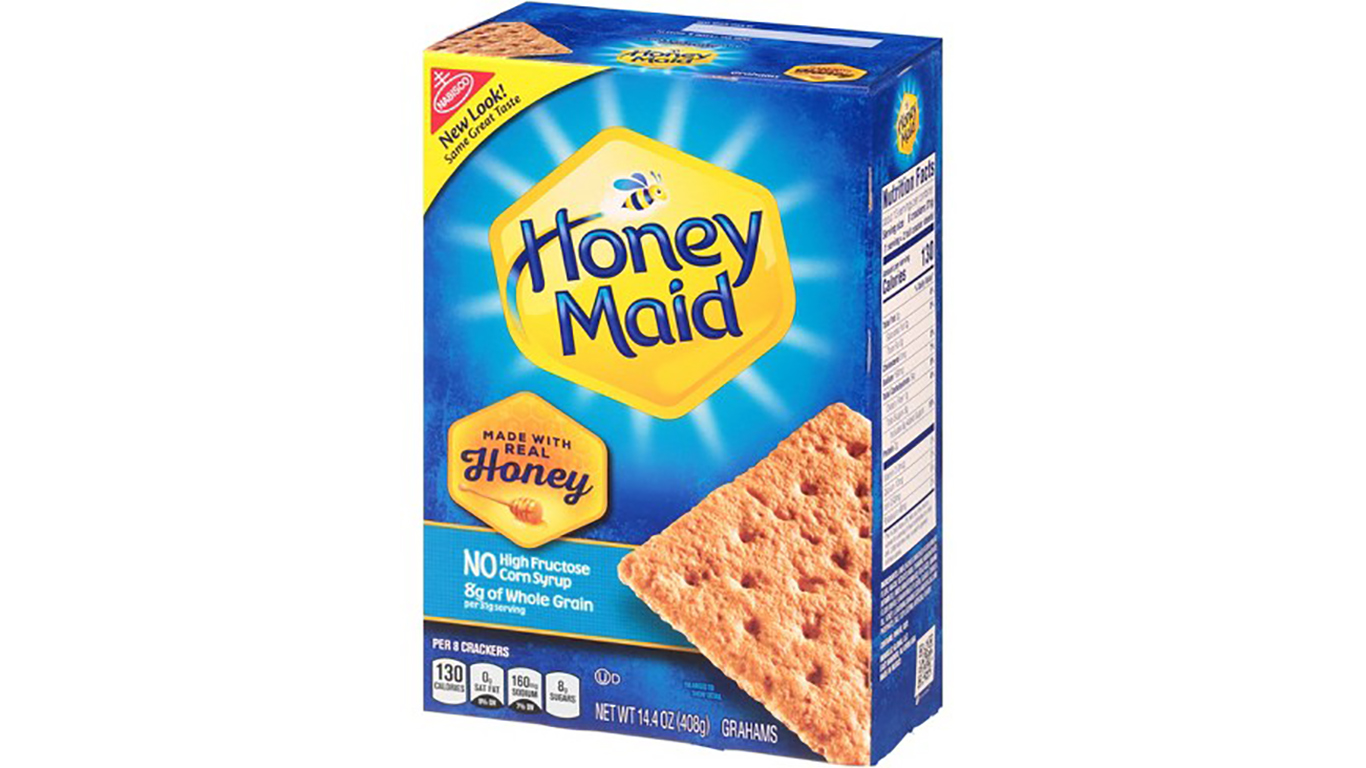 The Connecticut-born Presbyterian minister, social reformer, and health-food advocate Sylvester Graham (1794–1851) was a vegetarian who believed that certain foods (like meat) stimulated the libido — a bad thing, in his view. He wrote a book about bread, and maintained that white flour was unhealthy. Graham himself may or may not have invented the crackers that today bear his name — recipes didn’t begin appearing in cookbooks until three decades after his death — but they were originally made with the coarse whole wheat flour he espoused. Though a number of bakers were producing graham crackers, as they had come to be called, by the early 1900s, Nabisco’s version became particularly popular because the company softened the recipe with honey. The first Honey Maid grahams were made by Seattle’s Pacific Coast Biscuit Company in 1925. Nabisco bought the bakery five years later, and kept the name.