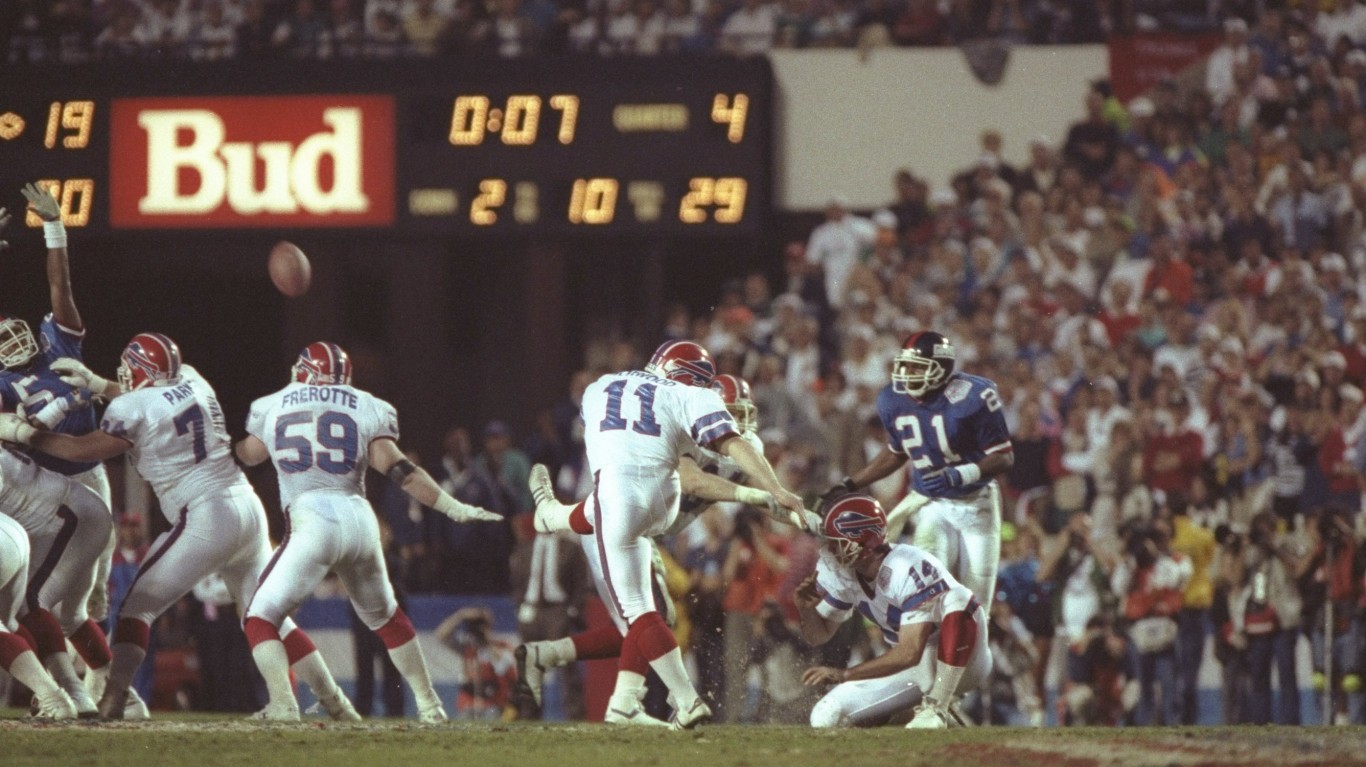 Scott Norwood’s missed field goal in Super Bowl XXV is one of the great “what ifs?” of sports history. Following the 1990 season, the Buffalo Bills made their first ever Super Bowl in franchise history, playing against the New York Giants.

Down 20-19 with just over two minutes left, quarterback Jim Kelly led the Bills down the field, getting to the Giants’ 29 yard line with eight seconds left. Norwood kicked the 47-yard field goal attempt just wide to the right. That is still the closest the Bills have come to winning the Super Bowl. Buffalo made each of the next three Super Bowls, but lost all three in blowout fashion. They have not been back to the Super Bowl since. 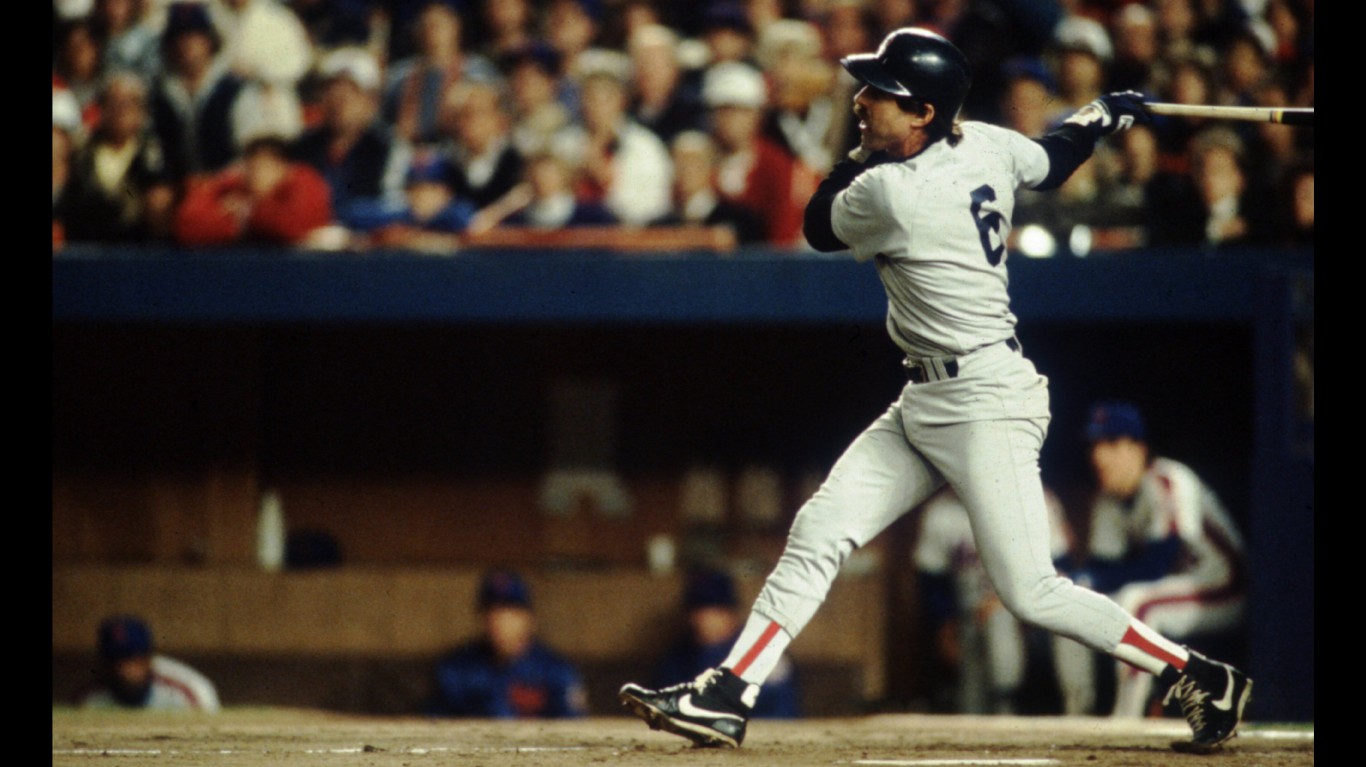 Bill Buckner’s gaffe in the 1986 World Series for the Boston Red Sox may be the most infamous error in MLB history. A tenth inning grounder from New York Mets batter Mookie Wilson skipped under Buckner’s glove, giving the Mets a 6-5 walkoff win in game six. The Mets cruised to a win in game seven, prolonging Boston’s decades-long wait for a World Series victory.

Though Buckner gets much of the blame for this loss, he was not the only one at fault. Boston led 3-2 going into the bottom of the eighth, when relief pitcher Calvin Schiraldi surrendered a run. The Red Sox scored two in the top of the tenth, handing Schiraldi a second chance at a save with a 5-3 lead. Just one out away from a title, Schiraldi gave up three straight singles and a wild pitch to tie the game – his second blown save in three innings. Yet Buckner’s error is what is remembered to this day. 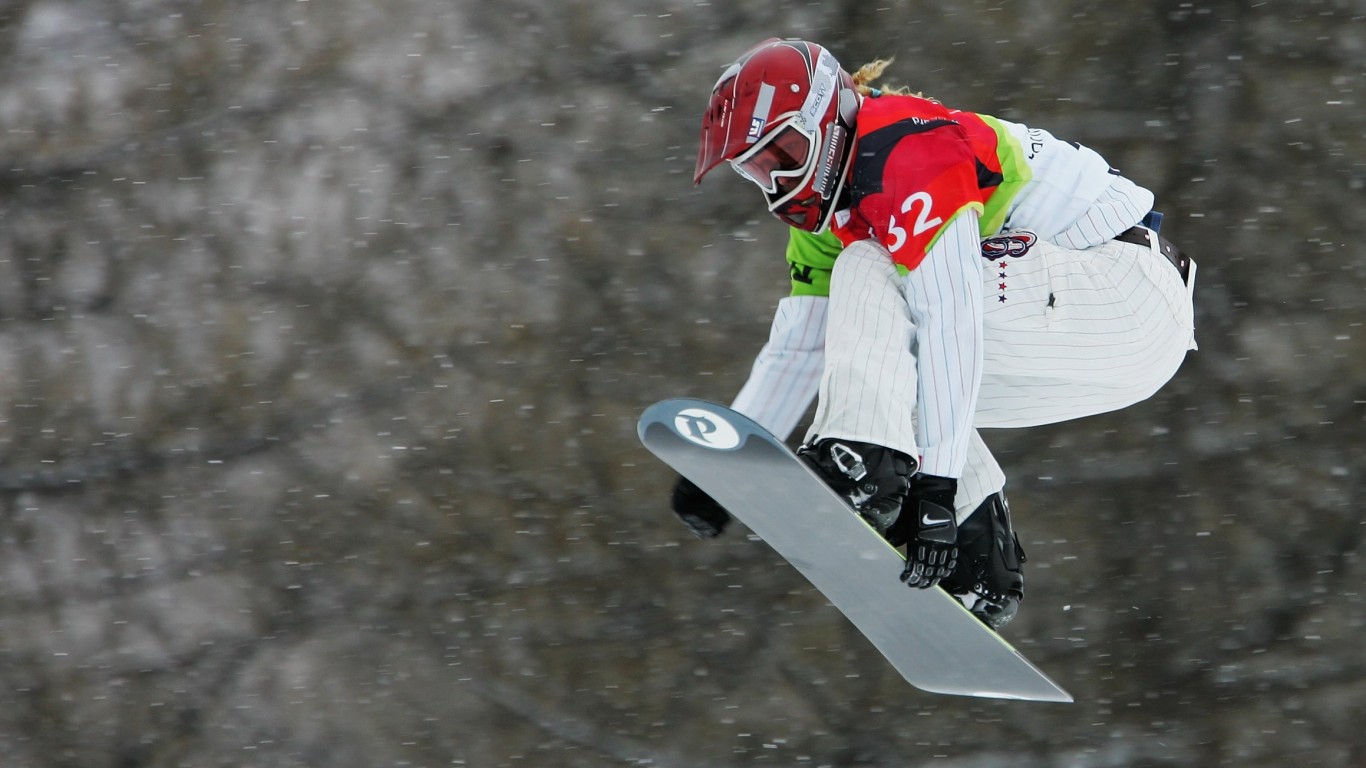 Lindsey Jacobellis had one of the most memorable mistakes in Olympics history. She was clear of the pack in the women’s snowboard cross final, when she grabbed her board on one of the final jumps to add some flair to her victory. The grab caused Jacobellis to fall, giving her opponent just enough time to pass her up for the gold. Jacobellis took home silver.

Jacobellis struggled in subsequent Olympics, with falls in semi-final heats costing her a shot at a snowboard cross medal in both 2010 and 2014. She led for much of the 2018 snowboard cross final, but again missed the podium, finishing fourth. But her perseverance paid off – Jacobellis not only won gold in her individual race in the 2022 Olympics, but she also won the team snowboard cross event with Nick Baumgartner. 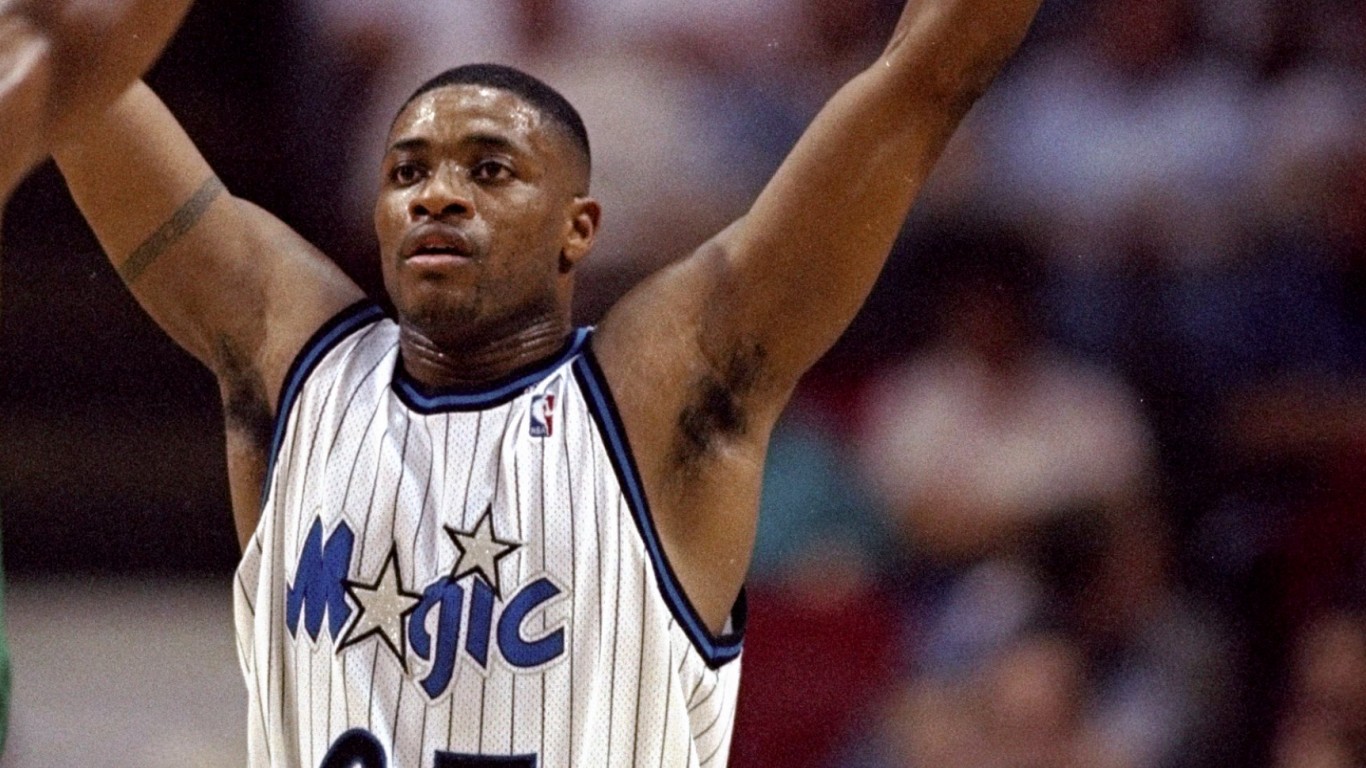 The Houston Rockets swept the Orlando Magic in the 1995 NBA Finals. But the series could have gone completely differently if not for Orlando guard Nick Anderson’s free throw struggles in game one. With 10.5 seconds remaining in game one, the Magic led 110-107 when Anderson was fouled.

If he had hit even one of his two free throws, the lead would have been insurmountable for Houston. Anderson missed both. He grabbed the rebound from his second miss, and was fouled again. Anderson missed both of those free throws as well. With just a few seconds remaining, Houston’s Kenny Smith drilled a game-tying three point shot. In overtime, the Rockets won on a last-second tip-in from Hakeem Olajuwon. Orlando still has yet to win an NBA title. 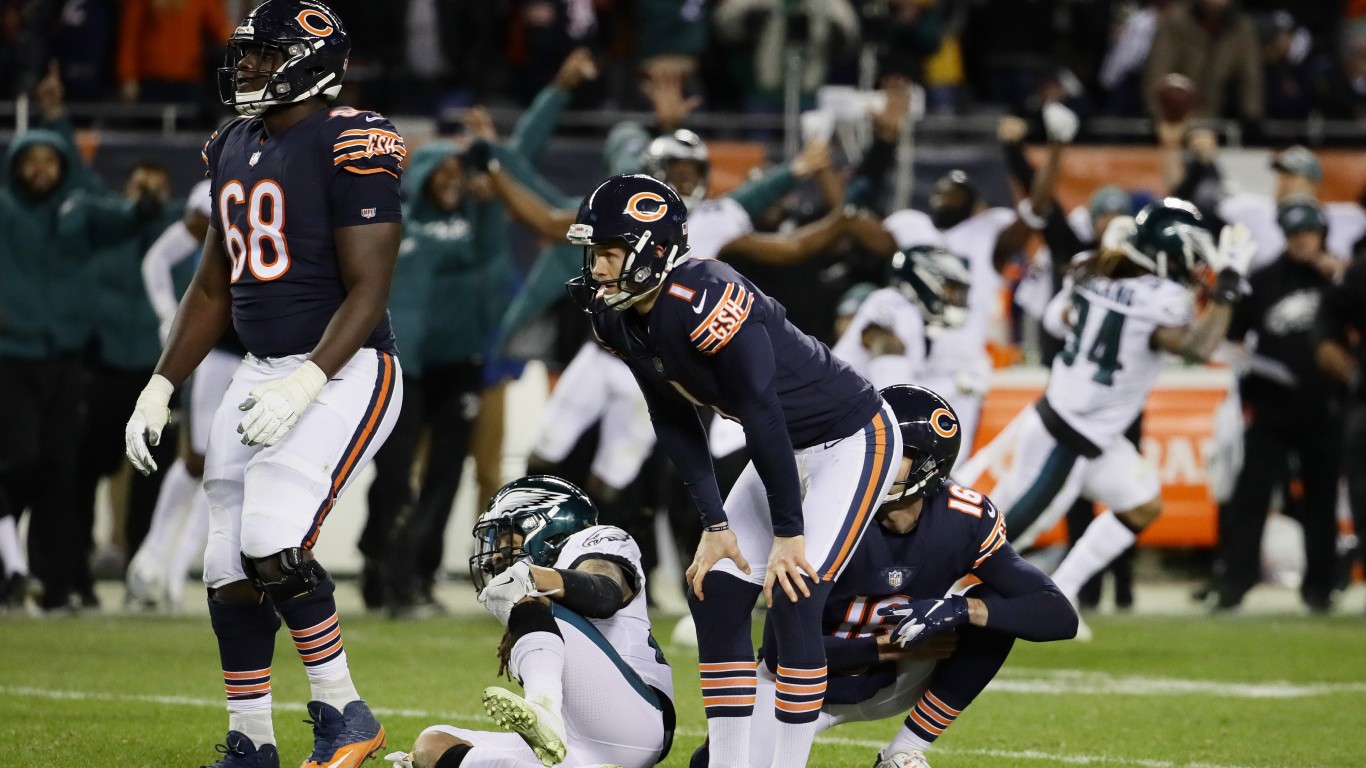 The 2018 Bears rode their top-rated defense to the playoffs. Hosting the Philadelphia Eagles in the opening round of the playoffs, the Bears went down 16-15 with just under a minute left after the Eagles scored a touchdown. Chicago QB Mitchell Trubisky led the Bears to within field goal range, giving them a shot at a winning kick with 10 seconds left.

Chicago kicker Cody Parkey, once an Eagle himself, had been perfect on the day, hitting all three of his previous field goals. But on his 43-yard attempted game winner, the extraordinary happened – the ball bounced off the left upright, down onto the crossbar, and out. Broadcaster Cris Collinsworth coined the missed kick the “double doink,” giving a name to one of the most heartbreaking moments in NFL history.