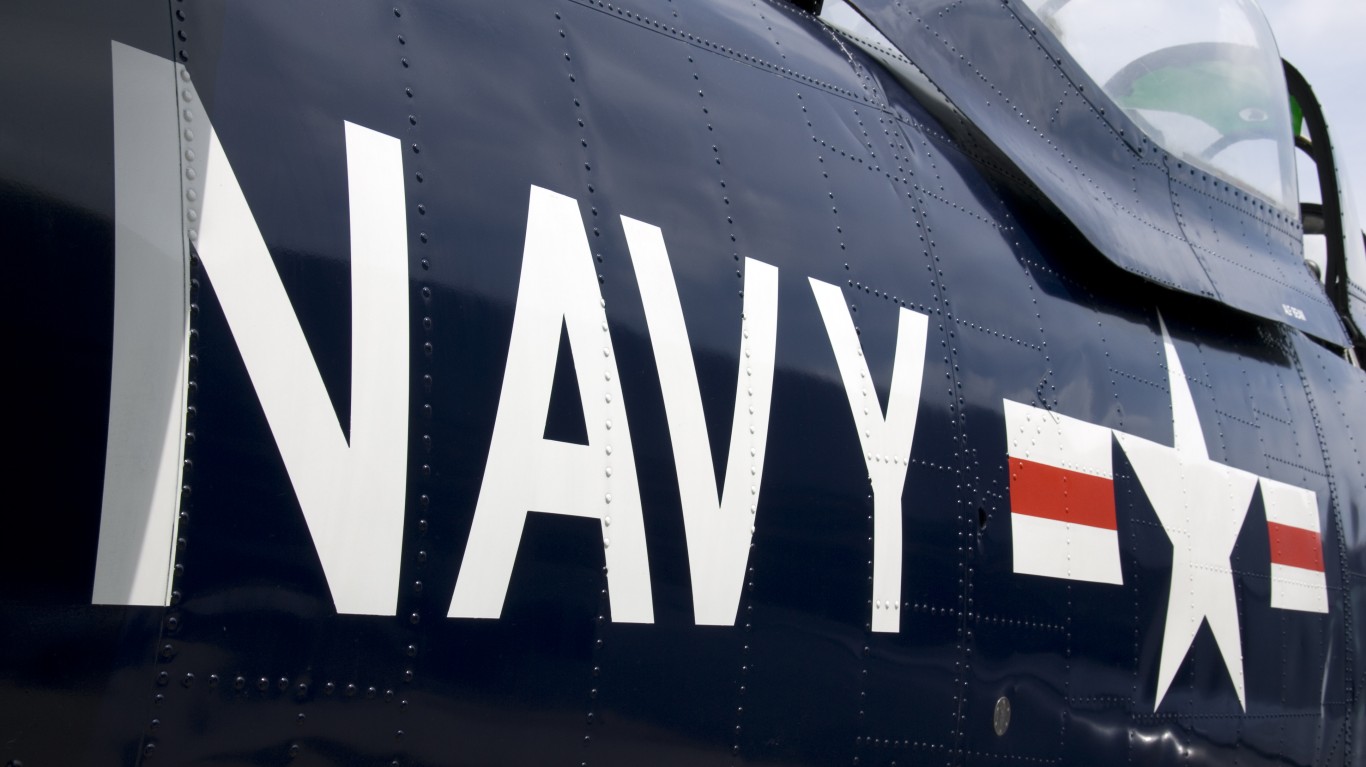 Basic training for Navy recruits is designed to turn civilians into sailors over the course of a 10 week program – recently lengthened from eight weeks – at the Naval Station Great Lakes in Illinois. After the initial week of processing and rigorous physical conditioning, recruits have a week of academic testing and team-building exercises, including emergency shipboarding and use of lifesaving equipment in the water.

Beginning in 2022, an additional two weeks have been added to basic training in order to incorporate more mentorship, life skills training, and personal and professional development. 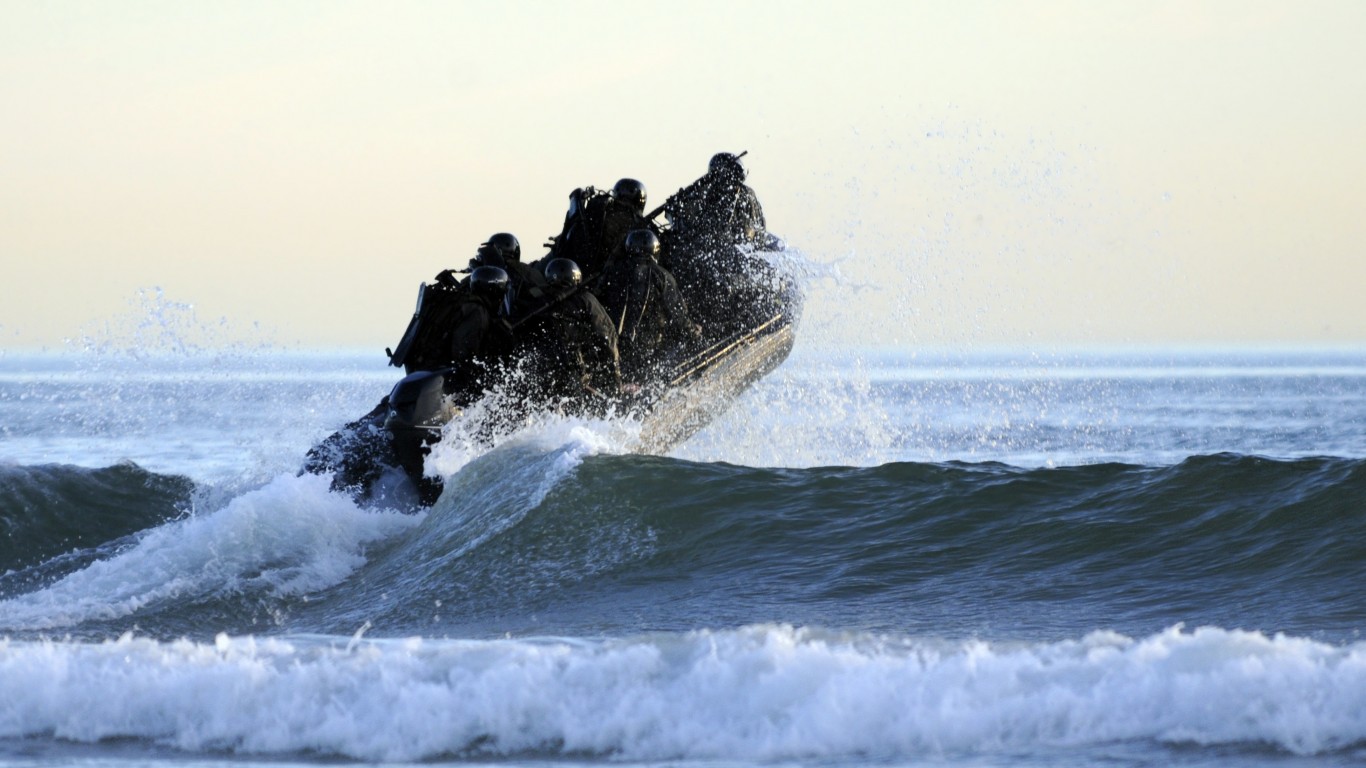 Navy SEAL training is among the most mentally and physically demanding programs in the U.S. military. The process takes over 12 months and weeds out about 75%-80% of sailors who enter it. Those who are admitted into SEAL training must meet a list of basic requirements related to physical fitness, mental aptitude, and age. The first stage of training is a two-month program at the Naval Special Warfare Preparatory School in Coronado, California, that focuses on improving physical fitness and mental toughness. At the end of the prep phase, candidates must be able to swim 1,000 yards in under 20 minutes, complete a 4-mile run in under 31 minutes, do 70 pushups, 60 curl ups, and 10 pullups, each in under two minutes.

In the second phase, aspiring SEALs spend three weeks in Naval Special Warfare Orientation improving swimming skills, completing obstacle courses, and developing teamwork ability and perseverance – all while being evaluated on character and integrity. Those who progress to phase three face a daunting seven weeks of intense physical training that culminates in what is known as Hell Week in which sailors reportedly get only four hours of sleep total over a five and a half day period, running over 200 miles.

Phase five is a seven-week period that focuses on combat diving, which is followed by three and half weeks of land warfare training. The final phase, SEAL Qualification Training, is the longest, at 26 weeks, and focuses on weapons, demolition, medical, cold weather, and tactics training. Newly minted SEALs are then assigned to a SEAL team where they spend at least a year preparing for deployment.

SEAL training is not only rigorous, but also dangerous. According to an investigation by the New York Times, at least 11 people have died in the program since 1953. 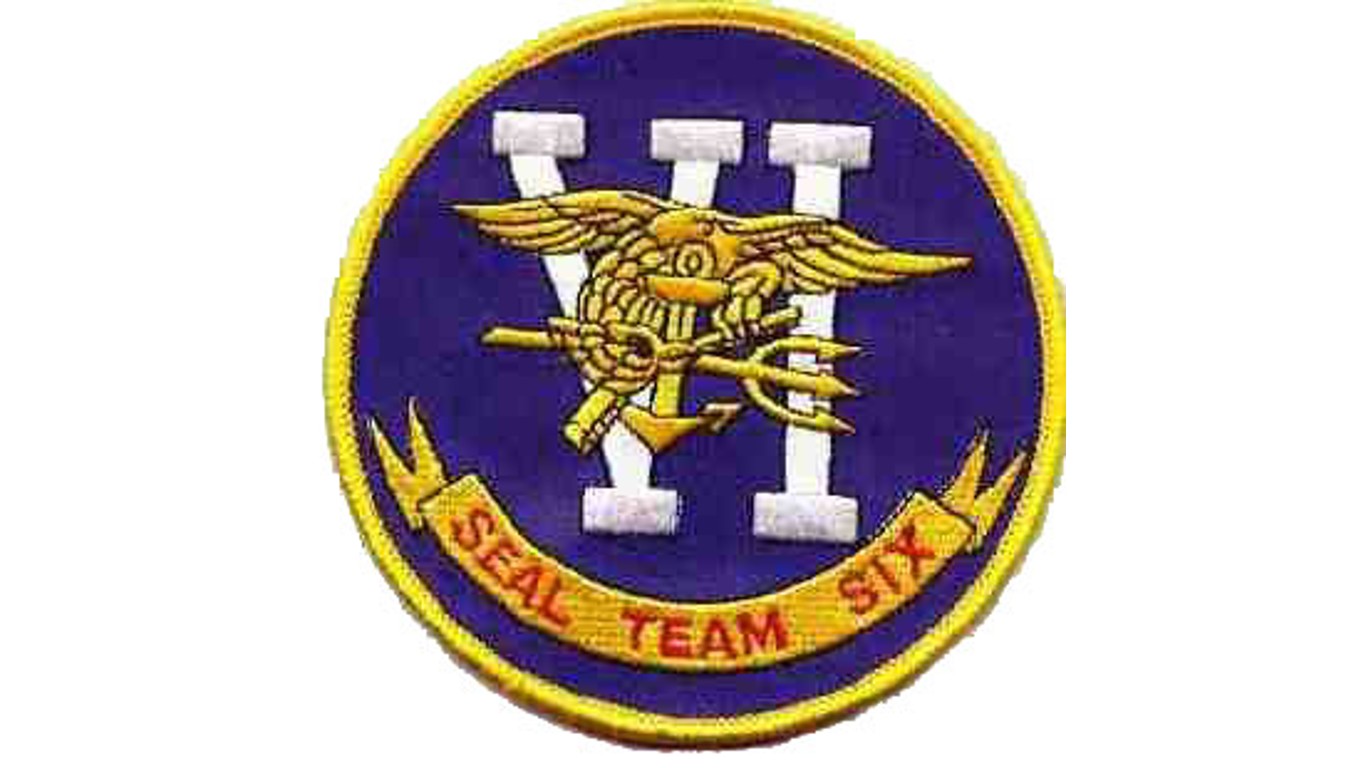 DEVGRU, the U.S. Navy component of Joint Special Operations Command, or JSOC, is an elite counterterrorism unit. All members of DEVGRU, or SEAL Team 6, must have a background of at least five-years as a Navy SEAL and have served in at least two deployments. Candidates must also meet stringent physical fitness requirements, the specifics of which are not publicly available. DEVGRU hopefuls face questioning by a board of senior officers related to their home and family life, military experience, personal finances, and alcohol consumption.

Those who are determined to be eligible for DEVGRU training face a six to eight month course divided into three phases – the first of which is Close Quarters Battle Training, which involves high-pressure shooting scenarios at close distances. Candidates are tested on reflexes and split-second judgment and are penalized for even slight mistakes with physical exercises.

Phase two is Advanced Skydiving Training, where SEALs jump from high-altitude aircraft and open their parachutes at low-altitudes. These maneuvers require supplemental oxygen use and land them miles from their target to allow for a silent approach. The third and final phase is known as Survival, Evasion, Resistance, and Escape Training, or SERE, which trains SEALs to survive with limited resources behind enemy lines for an indefinite period, while evading, resisting, and escaping capture. 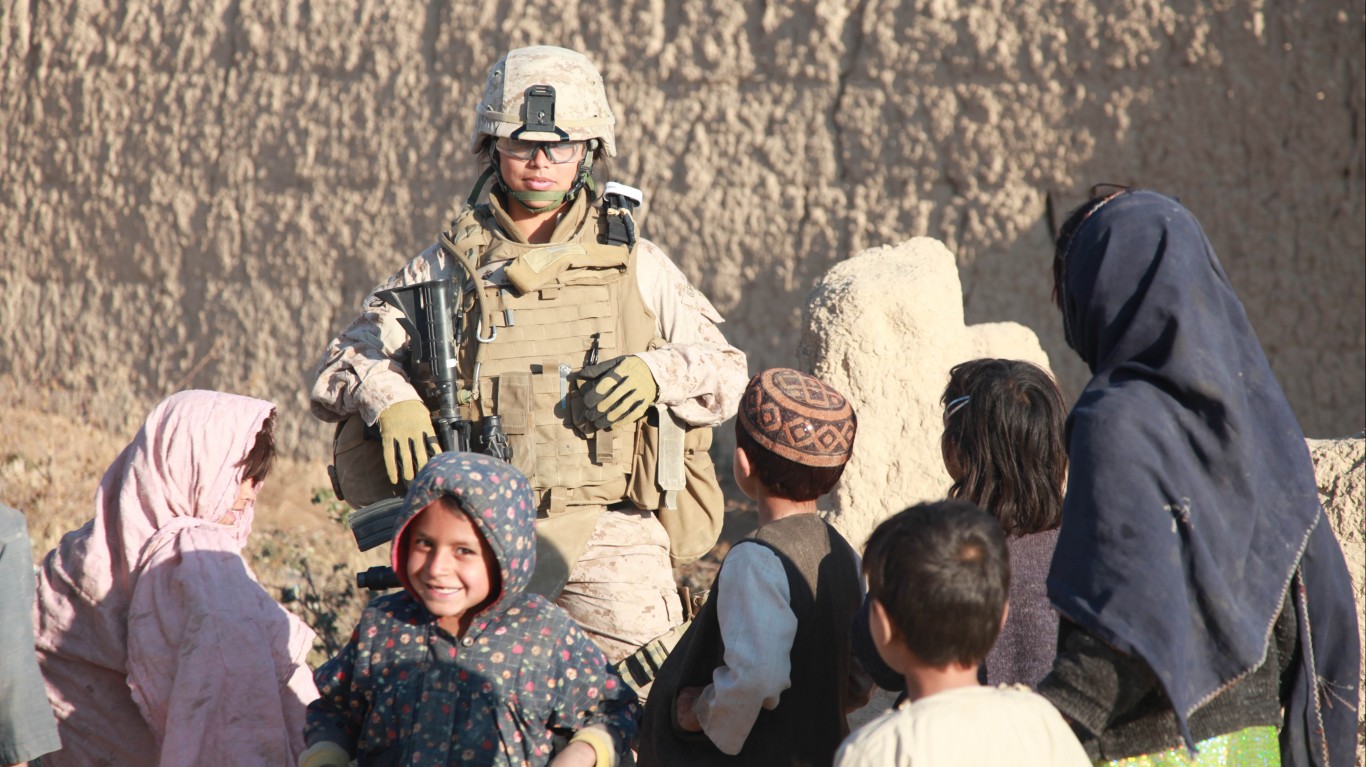 The Marine Corps is an expeditionary force that typically serves as the tip of the spear for American military operations. They are often the first units on the ground and clear the way for the U.S. Army to establish a foothold. Perhaps not surprisingly, the Marine Corps is said to have the most difficult basic training of all branches in the U.S. military – characterized by sleep deprivation, food rationing, rigorous marches, and other scenarios designed to test mental and physical limits.

The 13-week Marine boot camp takes place either in Parris Island, South Carolina, or San Diego, California, and is split into several phases. The first phase involves intense physical tests, and instruction in weapons safety, and Marine Corps history. In the second phase, the intensity of training and challenges are dialed up. Aspiring Marines also undergo water combat survival and martial arts training as well as combat conditioning.

In phase three, recruits undergo training in marksmanship and field skills. They also undergo what is known as The Crucible, a 54-hour field event designed to test the knowledge and skills they have acquired with minimal food and sleep. In phase four, the new Marines complete final exams and administrative tasks before graduating. 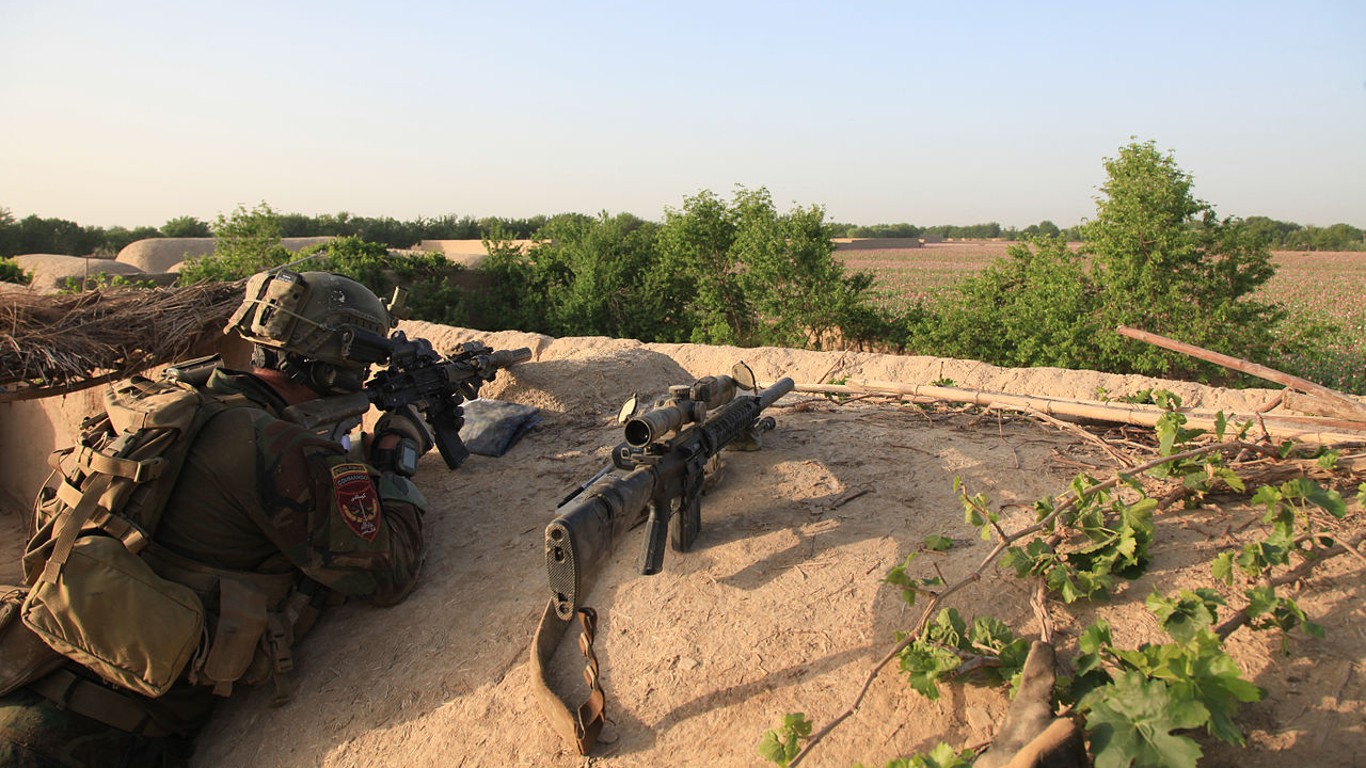 The assessment and selection process of MARSOC consists of two phases. In the first, Marines are tested with physically and mentally demanding exercises, including marches, swimming tests, and other drills over a three-week period at Camp Lejeune, North Carolina. This is followed by a second three-week period in which Marines are observed and evaluated for certain qualities and personality traits.

Those who make it through assessment and selection are enrolled in a nine month individual training course, or ITC. In the first 10 weeks of ITC, Marines instructed in a specific set of skills, including Survival, Evasion, Resistance, and Escape Training, or SERE, as well as fire support training. This is followed by an eight-week program that provides training in small boats, scouting, reconnaissance, and demolition. In the following five weeks, Marines are trained in close quarter battle, learning tactics and marksmanship with firearms to conduct raids in multiple environments.

In the final seven week phase, Marines are instructed in irregular warfare operations and tested in the skills they have learned in training.