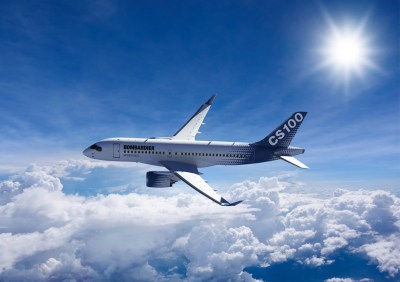 Source: Bombardier Inc.
Canada-based aircraft maker Bombardier Inc. suffered a significant setback on Thursday to its plans to build a commercial plane to compete with the 737 from Boeing Co. (NYSE: BA) and the A320 from Airbus Group. The company’s C Series flight test vehicle (FTV1) experienced an “engine-related incident” while the aircraft was on the ground at an airport near Montreal.

The incident is being investigated by the aircraft maker and the engine’s builder, Pratt & Whitney, a wholly owned subsidiary of United Technologies Inc. (NYSE: UTX). Bombardier has released no further details on the cause of the incident or its severity, although the Financial Times reported that the company said the airport’s fire service had been called out. The company also said that flight testing would resume once the investigation is completed.

The Pratt & Whitney engine being used on the twin-engine, single-aisle aircraft is a new design the company calls its Pure Power family. The engine is also available for the Airbus A320neo, a regional jet made by Mitsubishi, and the Russian Irkut MC21. The engine is said to cut fuel consumption by 16% compared with existing engines.

The Pure Power engine competes with the Leap engine designed and built by CFM International, a joint venture between General Electric Co. (NYSE: GE) and French engine maker Snecma. The CFM engines are being used on Boeing’s 737 MAX aircraft.