Airbus to Steal Sales From Boeing? 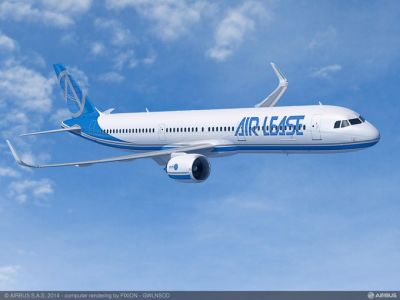 Source: Airbus Group NV
At its investor meeting Tuesday, Airbus did more than just provide facts and figures on 2014 deliveries and orders. The company also officially introduced a new version of its A321neo single-aisle jet, the A321neo 97t, for “97 tons.”

The new Airbus plane is seeking to replace the out-of-production 757 from Boeing Co. (NYSE: BA), a category of aircraft that Boeing essentially claims no longer exists. A 757-200W flies what the airlines industry calls long, thin routes; that is, long distances with relatively few passengers.

Airbus claims the A321neo 97t burns up to 30% less fuel than a 757 and that the replacement market for the older Boeing plane is 469 aircraft. Airbus also anticipates a market for an additional 500 new planes of that class.

Airbus expects first deliveries of the new plane in 2019 to customer Air Lease Corp. (NYSE: AL), which signed a memorandum of understanding with Airbus for 30 of the new planes. The A321neo 97t will carry a third auxiliary center fuel tank and could fly around 500 nautical miles farther than the current A321. The new plane’s maximum takeoff weight is set at 97.0 tons, compared with 93.5 tons on the current A321. The plane’s cabin is designed to accommodate a maximum of 206 passengers.

Boeing’s non-answer to the A321neo 97t is its new 737 MAX 9, which does not really compete with the new Airbus plane because its passenger capacity is smaller, its range is shorter and the MAX 9 cannot be easily converted to a stretch version that could match the specifications of the A321neo 97t.

Boeing’s answer, if it can be called that, is an all-new carbon-composite plane to replace the 737 MAX by 2030. That is 15 years away, and in the meantime Airbus could sell up to 1,000 of its new plane and wrestle away yet another piece of the airplane market from Boeing.

In a classic bit of the trash-talk these two rivals sling at one another, Boeing’s vice-president of marketing called Airbus’s market-size estimate for a 757 replacement “a little bit laughable.” Airbus could be laughing all the way to the bank.