Is FedEx About to Drop a $10 Billion Order on Boeing? 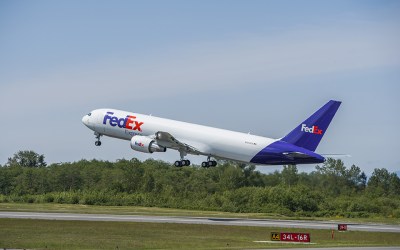 Source: The Boeing Co.
While an order for a few dozen of its 777-300ER passenger jets may be more to the company’s liking, Boeing Co. (NYSE: BA) will happily accept a large order for new cargo planes of any description. It now appears that FedEx Corp. (NYSE: FDX) is about to place an order for as many as 50 of Boeing’s 767-300F freighters. The list price for the plane is $199.3 million, valuing an order for 50 at nearly $10 billion.

The story was reported Wednesday morning by Leeham News and Comment. Leeham also said that FedEx could order up to 10 777Fs in addition to the 767s. At a list price of $318.7 million per copy, the 777F order could ring up as much as another $3.2 billion for Boeing.

FedEx operates 25 of Boeing’s 777-200s and has 9 more 777Fs on order. It could be that Boeing is making the package delivery firm an offer that is too good to refuse.

While the 767 freighter costs almost $120 million less than a 777 freighter version and would not contribute as much to Boeing’s revenues, an order for 50 is an awfully good start to keeping the company’s overall production rate up as Boeing tries to sell more 777s to fill production slots before the 777X is due for first delivery to customers in 2020.

According to Leeham, FedEx’s board of directors is meeting later this month in Seattle. The inference we draw is that a go-no-go decision on the Boeing order will be made then. If the company decides to place the order, we will hear about it everywhere. If FedEx chooses to pass, we may never know for sure whether there was ever any chance for a sale at all.