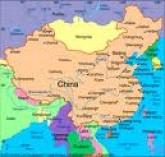 China is now the largest car market in the world, having moved ahead of the US last year. Most analysts believe that 16 million cars and light trucks will be sold in the People’s Republic in 2010 while the US market will about 12 million.

GM, the No.1 car company in the US and one of the top firms in China, says that it sold more vehicles in China than in America for the first time during the first half of this year. Car sales in China have been up by 50% most months

GM sold 1.21 million vehicles sold in China in January to June — a near 50 percent gain over a year earlier — compared with 1.07 million sold in the U.S. market,  according to several sources.GM released car sales numbers for the US and they were up a very modest 13%, less than many analysts expected.

GM has several advantages in China. The first is that it has been in the market for decades and has powerful manufacturing relationship with several local car companies. The only global auto company in the world that can match GM’s sales in the world’s most populous nations is VW. China’s Buick brand is particularly popular among China’s middle class buyers.

GM’s future may lie more outside its home country. It has begun to retool its Opel operations in Europe. Sales in South America have remained relatively strong. It is well ahead of rivals Toyota Motor (NYSE: TM) and Ford Motor (NYSE: F) on the mainland.

GM may have its IPO this year, and its position in China will be one of the most critical aspects of its success.