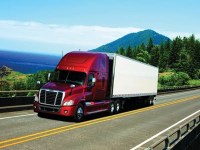 Navistar International Corp. (NYSE: NAV) may still want to remain an independent company, but the troubled truck and engine maker has managed to avoid a proxy fight. The price reaction on Monday is indicating that the street thinks this is a good development. Top activist investors Carl Icahn and Mark Rachesky have been attacking Navistar and the company finally agreed to name three new board members including Rachesky.

A Carl Icahn-nominated member is now Vincent Intrieri and a third nominee who will agreed upon by both Mr. Icahn and Dr. Rachesky will be named at a later date. It may sound a bit like a baseball trade, but honestly that is not highly unusual when it comes to companies which end up buckling under activist investor pressure. Intrieri and Rachesky will replace Mr. Eugenio Clariond and Mr. Steven J. Klinger on the board. The three new members will replace other board members so that Navistar’s board of directors will remain set at 10 directors.

One reason that Navistar had to go along with this is that the strategy of a new engine failed and the shares have been crushed in a manner where it was undeniable that real change was needed. Under a new CEO, Navistar threw in the towel on its new diesel engine and the trucks will now be sold with engines from Cummins Inc. (NYSE: CMI).

One issue that came up recently was a poison pill anti-takeover provision which the company could trigger any time a new shareholder reaches 15% of the ownership. That would not apply to mutual fund manager Franklin Resources Inc. (NYSE: BEN) with its 18% stake as of June 30. Collectively, funds tied to Icahn and to Rachesky own more than 25% of Navistar but neither manager is independently known to be above the 15% poison pill trigger even though there are close ties between these two managers to say the least as Rachesky used to work with Icahn years ago.