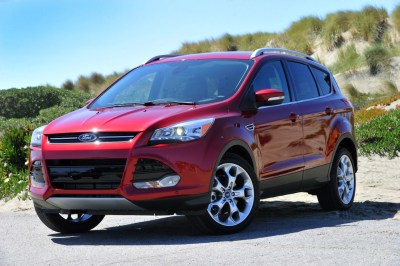 Source: Ford Motor Co.
One solid effect for the economy of falling oil prices has been the lowering of gasoline prices to the American consumer. Though prices at the pump have ticked off of the multiyear lows in most of the country, the average cost to fill up the tank is still much lower than this time a year ago. This savings, combined with the lowest interest rates since 1956 and domestic vehicles at the oldest average age in years, has the showroom at car dealers around the nation, and the globe, humming.

A new report from the analysts at UBS points to the fact that 70% of the auto suppliers are optimistic about the industry as a whole, versus just 56% last year in the third quarter. While they feel that most of the suppliers are fully valued at these levels, and profits may slow, they remain very positive on four top stocks to buy in the industry.

Ford Motor Co. (NYSE: F) remains a favorite stock to buy at UBS. The venerable car maker has reshaped the company’s product line in recent years, and sales have been outstanding. With sales booming, not only in the United States, but in China, and six new models being introduced in Russia in 2015, the company is expanding market share while maintaining a competitive pricing structure. The iconic F-150 trick remains the top-selling truck in America, and it has been the top-selling vehicle for the past 32 years, despite strong challenges from the competition.

Ford investors are paid a very solid 3.75% dividend. The UBS price target for the stock is $19. The Thomson/First Call consensus price target is $16.82. Shares close Tuesday at $16.09.

General Motors Co. (NYSE: GM) is the other top automobile maker rated as a Buy at UBS. Despite the recall troubles, hedge funds and mutual funds are continuing to stick with the company, as many view the stock as very undervalued. GM trades at a low 8.4 times estimated 2015 forward earnings. Like Ford, GM has benefited from incredible sales in China to boost revenue. GM invested heavily in China decades ago and grabbed a big chunk of what is now the world’s largest auto market. The company sold 3.16 million vehicles in 2013, an increase of 11%, and beat that number in 2014.

Tenneco Inc. (NYSE: TEN) is one of the world’s largest designers, manufacturers and marketers of clean air and ride performance products and systems for automotive and commercial vehicle original equipment markets and the aftermarket. The company just reported outstanding earnings per share of $1.05 in the fourth quarter of 2014, which beat the consensus estimate. Net income increased to $65 million from $59 million a year ago. Earlier this month the company’s board of directors authorized the repurchase of up to $350 million of the company’s outstanding common stock over the next three years as part of the company’s overall capital allocation strategy.

The UBS analysts give investors solid choices in automobile manufacturing and sales and original equipment manufacturing. With all the companies having a global scope, there could be some currency headwinds, but the strong domestic market can help to offset that.