At January’s Detroit Auto Show, Ford Motor Co. (NYSE: F) dropped a few hints about a new all-electric, high-performance sport utility vehicle that originally was called the Mach 1 and included styling based on the company’s iconic Mustang. On Friday, the company appears to have backed off on the name, but the Mustang styling remains.

Details are scarce, of course, other than that Ford plans to have the vehicle on showroom floors by 2020 and that its planned range between charges is 300 miles. The vehicle will be built on one of five platforms the company plans to use in the future, and Ford is targeting an entry-level price of under $40,000, right about where the Chevy Bolt and the Tesla Model 3 have staked out their territories. 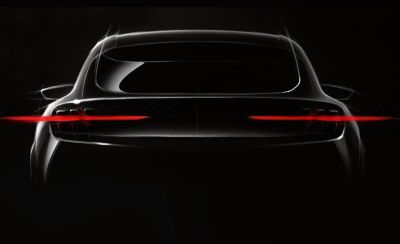 At the same Detroit Auto Show, Ford revealed plans to invest $11 billion in electric vehicles. The company expects to introduce 40 new electrified models by 2022. CEO James Hackett scuttled the design team’s first effort, calling it too generic and directing designers to seek a design that would produce a win for Ford rather than just another ho-hum electric car.

Referring to those Mustang-like taillights, Hackett told Forbes, “That’s the money shot. That changed my body language when I saw that.”

Now that Ford has basically ditched its entire passenger car line — except for the Mustang — and focused on SUVs and F-Series pickups, it makes sense for the first of the company’s all-electric cars to be an SUV. Consumers want them and have shown they are willing to pay a premium for the privilege of owning one. Electrifying the drive train is icing on the SUV cake, both for manufacturers and consumers. Ford’s big problem is that it got a late start, but adding Mustang details to its first all-electric vehicle may be enough to narrow, if not close, the gap.

24/7 Wall St.
Best and Worst Car Brands of 2018
Get Our Free Investment Newsletter