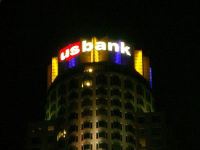 U.S. Bancorp (NYSE: USB) reported third-quarter 2012 results before markets opened this morning. The Minneapolis-based bank posted earnings per share (EPS) of $0.74 on revenues of $5.18 billion. In the same period a year ago, the company reported EPS of $0.64 on revenues of $4.74 billion. Third-quarter results also compare to the Thomson Reuters consensus estimates for EPS of $0.74 and $5.14 billion in revenues.

The company’s chairman and CEO said:

Our third quarter earnings included continued strong mortgage banking activity, which contributed to our growth in fee income, residential real estate loans and loans held for sale. Solid new lending activity outside of mortgage also helped to grow our balance sheet, particularly in commercial loans. … during the third quarter we were able to return 67 percent of our earnings to shareholders in the form of dividends and share buybacks — consistent with our goal of returning 60-80 percent of the capital we generate back to our shareholders.