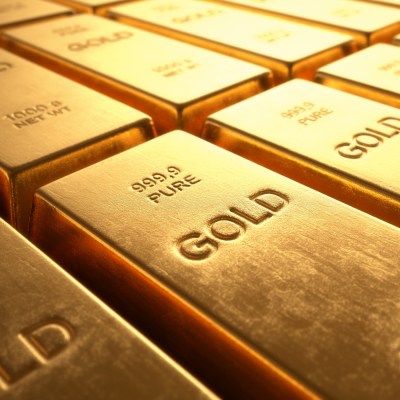 Source: Thinkstock
Given the precarious shape of the world, with a bellicose Iran and North Korea, investors certainly would want to consider a position in gold to be a sound idea in a well-rounded portfolio. However, the potential for Federal Reserve rate hikes and other issues have continued to weigh on the precious metal, keeping it boxed in a trading range. One top Wall Street analyst feels that the floor is in and the price could go up.

A new RBC research report makes the case that three rate hikes for this year — in March, June and at the last meeting in December — are already priced into a $1,200 floor price, with $1,300 a ceiling. With gold trading at under $1,220, there is clearly the potential for upside.

We found four stocks rated Outperform at RBC that make good sense for investors looking to add some gold to their portfolios.

This is one of the largest mining companies, as well as a solid buy for more conservative accounts and a top pick at RBC. Newmont Mining Corp. (NYSE: NEM) is a leading gold and copper producer. It employs approximately 29,000 employees and contractors, with the majority working at managed operations in the United States, Australia, Ghana, Peru, Indonesia and Suriname.

Newmont is the only gold producer listed in the S&P 500 index, and it was named the mining industry leader by the Dow Jones Sustainability World Index in 2015. The company is an industry leader in value creation, supported by its leading technical, environmental, social and safety performance. Newmont was founded in 1921 and has been publicly traded since 1925.

The company announced recently that “first gold” has been poured at its new mine, called the Merian gold mine in Suriname in South America. Newmont reported Merian contains gold reserves of 5.1 million ounces and that annual production is expected to average between 400,000 and 500,000 ounces of gold at competitive costs during the first five full years of production.

Kinross posted numbers that were below estimates, and it guided output to 2.5 to 2.7 million gold equivalent ounces at all-in-sustaining costs of $925 to $1,025. The company noted that Tasiast Phase One is on track for second-quarter 2018 startup. Reserves were lower 6.7% year-over-year.

This is a solid stock for investors looking for a gold presence with somewhat less risk. Royal Gold Inc. (NASDAQ: RGLD) is a precious metals royalty and stream company engaged in the acquisition and management of precious metal royalties, streams and similar production-based interests. The company owns interests on 193 properties on six continents, including interests on 38 producing mines and 24 development stage projects.

The company maintains a solid asset base of long-life royalties operated by some of the best gold mining companies in the world. Royal Gold announced earlier this fall the acquisition of a 3.75% net value royalty (NVR) on the Crossroads deposit for $70 million. Starting in fiscal 2019, the NVR is expected to add $8 million of annual revenue to the company.

The 2017 forecast for the company was lowered back in January, and Merrill Lynch feels the stock is very undervalued when compared to sector peers. The forecast is 38% revenue growth by 2019 for estimated earnings. The analysts also think the company’s rising cash-flow can be used for acquisitions and growing the dividend.

This is another top company that many on Wall Street favor. Silver Wheaton Corp. (NYSE: SLW) is a Canada-based precious metals streaming company with approximately 60% of its revenues from the sale of silver and 40% from gold. Under the terms of long-term contracts, the company purchases silver and gold from a variety of mines, including Goldcorp’s Penasquito mine in Mexico, Vale’s Salobo mine in Brazil, Lundin Mining’s Zinkgruvan mine in Sweden, and Glencore’s Antamina and Yauliyacu mines in Peru, then sells the silver and gold into the open market.

The company fits into the RBC metrics for quality assets and royalty streams, as well as the kind of balance sheet that has protected the company from the pitfalls of miners with huge capital expenditures.

Proper asset allocation should always include a single-digit percentage holding of precious metals like gold and silver. Not only do they hedge over the long term, they can really help if the market does go into a correction or bear market mode, as they tend to trade inverse to markets. Adding shares after the recent big sell-off looks like a solid move long term.