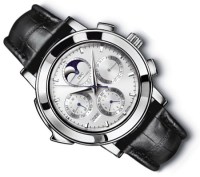 Fossil particularly noted that watch sales were strong, and that is boosting Movado shares as well today. Movado’s second quarter ended in July and the consensus estimate calls for EPS of $0.17 on revenue of $119.4 million.

About 10% of Fossil’s shares were short as of mid-July, as were about 8% of Movado’s shares. Fossil’s first quarter results were not pretty and that probably caused the short interest in the company to rise. Today’s jump certainly reflects some not-insignificant degree of short covering.

But the higher share prices for the other luxury goods makers could represent a growing belief that high-priced consumer cyclicals like watches may be staging a comeback. We saw some evidence of that yesterday in an announcement from Compagnie Financière Richemont, the Swiss-traded owner of brands like IWC watches, Cartier, Piaget, and Montblanc. Richemont was succinct:

[F]or the four months ended July 2012 showed sales rising 24 % on a reported basis and 13 % on a constant currency basis against the comparative period. On this basis, Richemont’s operating profit for the six months ending 30 September 2012 is likely to show an increase of between 20 % and 40 % compared to the first six months of the last financial year. Net profit for the same period may increase by between 20 % and 40 %.

That projected sales increase is bigger than huge, especially in a global economy that is supposedly very weak. And some of the watches sold by Richemont go for $250,000 or more. Who’s buying this stuff?

The slowing of economic growth in China, the Eurozone recession, and the weak US economy would seem to indicate that the growth in sales of luxury items should be slowing, hence the short positions. Maybe things are not as bad as they seem, especially for the relatively small percentage of people who can afford to buy luxury goods at all. But even those lucky few (at least those in the US) are saying that they have lowered spending. The anomaly here is striking.