Source: Jon Ogg
The longstanding fight between Herbalife Ltd. (NYSE: HLF) and short-selling activist investor Bill Ackman just took yet another odd turn. That turn has at least so far gone in the favor of Herbalife rather than in the favor of Ackman on an anti-Herbalife presentation that was touted as the beginning of the end of the controversial company.

Just on Monday, Ackman said that this would be the most important presentation of his career. Ackman also said he would stake his career on it, and that it would lead to the company’s collapse. John DeSimone, Herbalife’s CFO, spoke against this presentation at 9:00 a.m. on CNBC, and DeSimone seems to have been the winner, with his transcript available here.

The trading and stock market verdict ebbs and flows one way or another each and every day, but the reaction on Tuesday is one asking “Is that all you have?” to Mr. Ackman. An image of Jim Cramer’s tweet is shown below, not exactly in favor of Ackman’s presentation.

Here was a snippet of the Yahoo! Finance news headlines (click image to enlarge) showing how the bias has not exactly been on the side of Pershing Square’s Bill Ackman. 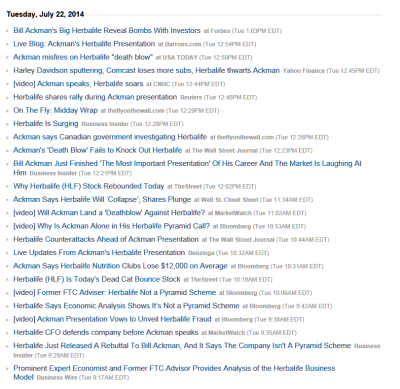