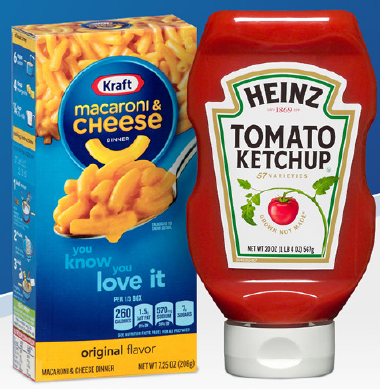 A deal announced in late March that brought together two of the country’s best-known consumer food products companies is now complete and stock in the new Kraft Heinz Company begins trading Monday July 6th on the Nasdaq under the ticker symbol KHC. The new firm will be the fifth-largest food and beverage company in the U.S.

Heinz has been privately held by 3G Capital and Warren Buffett’s Berkshire Hathaway Inc. (NYSE: BRK-A) since 2011. The two firms paid a total of $11 billion for Heinz. When the transaction closed last week, Berkshire Hathaway had acquired a total stake of 52.5% in Heinz. Buffett and two other Berkshire Hathaway employees will sit on the new company’s board and three 3G Capital executives will also join, including Alex Behring, who becomes chairman. Outgoing Kraft CEO John Cahill also gets a board seat.

The Kraft Heinz Company now owns a laundry list of some of the world’s best-known brands, including Jell-O, Maxwell House, Planters, and Kraft as well as Heinz’s ketchup, soups, and other products.

Heinz effectively offered $67 a share for Kraft when the deal was announced in March. Since then Kraft stock has risen to close at $88.9 a share on Friday. The stock’s 52-week high is $91.32.

How much the new company is really worth remains to be seen. Consumer product companies like Kraft and Heinz have had trouble keeping up with changes in consumer tastes that now run more to fresh foods rather than pre-packaged fare.