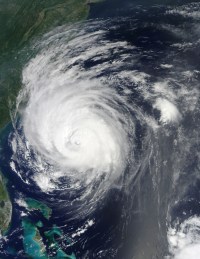 Source: flickr / gsfc
The total value of these residential homes is over $80 billion.

“Based on current forecasts, Sandy is likely to make landfall along the northeastern Atlantic coast early Monday,” said Dr. Howard Botts, vice president and director of database development for CoreLogic Spatial Solutions. “Though it is still early and the projected path is constantly changing, Sandy could pose an enormous threat to major metropolitan areas in the Northeast, like New York City and Long Island, Atlantic City and Baltimore.”

The greatest risk among states which are in the path of the storm is to New York. Over 81,000 properties are at risk, with a total value of $35 billion.

Among MSAs the greatest risk is to New York City-Northern New Jersey-Long Island, NY-NJ-PA. The potential number of homes potentially impacted 119,000 with an aggregate value of $48 billion.

Hurricane-driven storm-surge flooding can cause significant property damage when high winds and low pressure causes water to amass inside the storm, releasing a powerful rush over land when the hurricane moves on shore. The CoreLogic analysis measures damage from storm surge and does not include potential damage from wind and rain associated with hurricanes.

A complete analysis is here.

This Is America's Most Dangerous State