Money and Politics: Blue States Bad for Business and Employment

Source: Thinkstock
Do you want to live, or operate a business, in a state that is good for business or bad for business? It turns outs that the answer may depend on your politics. When elections come around, jobs and job creation are often the top bills, and a fresh study coincidentally shows a serious gap between red states (Republican) and blue states (Democrat) from the 2012 election when it comes to being good and bad for business. There also turns out to be a huge difference for being good or bad for jobs, when you look at the unemployment rates for these states.

CNBC recently issued an updated report on all 50 states ranking each by how good they are for business. 24/7 Wall St. decided to take a look at how each of these states skew in the aggregate. When it comes to doing business and to jobs, the red states stand tall over the blue states.

According to CNBC, they scored all 50 states on 51 measures of competitiveness developed with input from business groups including the National Association of Manufacturers and the Council on Competitiveness. States received points based on their rankings in each metric. These metrics were then put into 10 broad categories, weighting the categories based on how frequently they are cited in state economic development marketing materials. Effectively, this ranked the states based on the criteria they use to sell themselves.

Some of the metrics CNBC looked at included each state’s cost of doing business, its local economy, its infrastructure, workforce, quality of life, technology and innovation, and how friendly the state is toward businesses. Also included were the cost of living, education and access to capital.

24/7 Wall St. decided to tally up the numbers of blue states and red states out of the best and worst states in their study. It turns out that if you are running a business, being in a red state won hands down. We also included the unemployment rates of each state from the Labor Department for May 2013, and again the red states trump the blue states.

Blue State Percentages Versus Red States on Being Good for Business 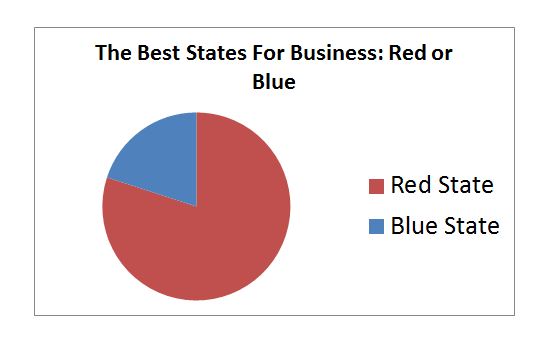 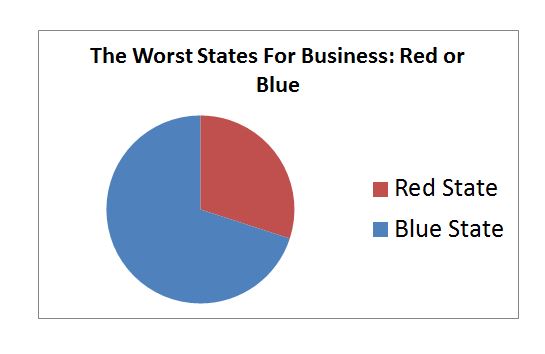 Many factors went into the study, and we were more than surprised that the numbers had such a wide disparity this long after the presidential election. It may be unfortunate that some states are just better than others for business and better for employment for those who want to operate or live in those states. It also happens to turn out that those “better” states currently happen to be red states.

We also included a reference back to states with the highest tax burdens that we ran in late 2012. It turns out that being in a blue state is not good on the taxation metric either. We took a look at recent articles from reputable sources as well, to see if there was a coincidence or a challenge. Here are some recent articles on the subject:

The Housing Market Is About to Be Hammered

New Stimulus Check From California Coming Next Month: Check If You Qualify And...