Source: Thinkstock
Despite an improvement in the nation’s jobless rate, concern about unemployment has become the top worry among Americans. The news comes as the ranks of the long-term unemployed remain historically high, and people continue to move out of the job market completely. At 6.6% , the jobless rate remains far above the normal 5%, which signals a complete post-recession employment recovery.

According to new Gallup data on the “most important” U.S. problems:

Americans have a new No. 1 problem. Nearly one in four Americans (23%) mention jobs and unemployment as the most important problem facing the country, up from 16% in January. The government and politicians had topped the list since the government shutdown in October.

Well down Gallup’s list of problems were the “general economy” at 20%, “dissatisfaction with government” at 19%, the “high cost of healthcare” at 15% and the “federal deficit” at 8%. The worries about trouble with Obamacare sign-ups have apparently receded. And, as the congressional battle over the deficit is months beyond its peak, worry about it has fallen off as well.

The number of people “satisfied with the way things are going” may be the best measure of how Americans view their current circumstances. According to Gallup’s analysis:

Twenty-two percent of Americans are satisfied with the way things are going in the U.S., similar to the 23% found in December and January. This is up from the 12-month low of 16% in October during the government shutdown but is similar to the low numbers found in many other months last year. The all-time high on this measure in Gallup’s history was 60% in March 2003, while the low point was 7% in October 2008.

The recovery from this sentiment has not progressed as much from the recession as might be expected.

Now that the shutdown is over and the government has successfully passed a budget and avoided another debt ceiling shutdown, Americans appear to have shifted their focus away from the government and back to the still relatively weak job market.

However, as the study shows, sentiment can shift rapidly. Unemployment may only stay at the top of the list until there is another threat of a government shutdown or a brutal battle over the budget. 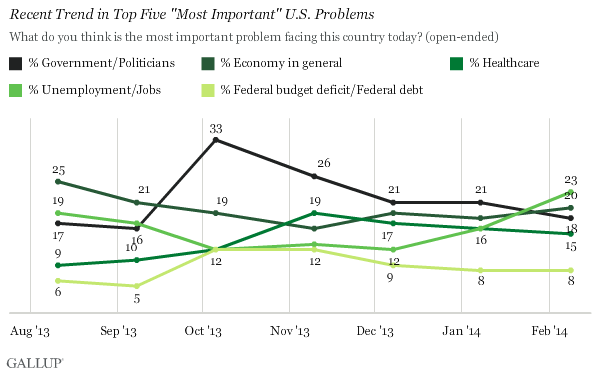 Methodology: Results for this Gallup poll are based on telephone interviews conducted Feb. 6 to 9, 2014, on the Gallup Daily tracking survey, with a random sample of 1,023 adults, aged 18 and older, living in all 50 U.S. states and the District of Columbia.