By John C. Austin, nonresident senior fellow in the Metropolitan Policy Program at the Brookings Institution

Since Rust Belt voters tipped the results of the 2016 election, interest in effective strategies for supporting new business and job growth in this important region has intensified.

Such interest recognizes that the states of the upper Midwest share more than their swing state status. A unique economic and social development storyline unites the industrial heartland, extending across all or part of 12 states from Minnesota and Missouri in the West, through the Great Lakes and up the Ohio River Valley to Western New York, and to Pennsylvania and West Virginia in the East. The region has many economic challenges, but also boasts important economic strengths, perhaps none as important as the tremendous innovation and talent emerging from its companies and universities.

Yet a lack of risk capital in the Rust Belt has held back the region’s capacity to translate its formidable innovation and talent assets into new businesses and jobs. That’s beginning to change, but public policies could do much more to accelerate the development of a robust innovation infrastructure equal to the Midwest’s potential.

Home to more than 200 of the nation’s Fortune 500 companies and 20 of the world’s top 200 research universities, the upper Midwest generates 26 percent of the nation’s corporate and university patents and 31 percent of its university-based research and development. The latter includes more than one-third of the nation’s highly competitive National Institutes of Health (NIH) research funding, key to the creation of new drugs and medical technologies. 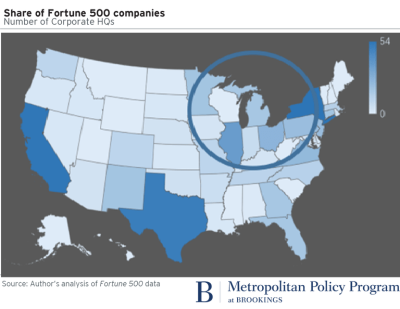