Forecasts for global economic growth for 2019 and 2020 have been shaved from last year’s 3.6% growth rate to 3.3% in 2019. That estimate came from the International Monetary Fund (IMF) World Economic Outlook published in April and may prove to be too optimistic.

In a report published last week by William Emmons, lead economist at the Federal Reserve Bank of St. Louis’s Center for Household Stability, warns that the housing signals are strengthening for a recession later this year or in the first half of next year.

A slowdown in the housing market has preceded every U.S. recession since World War II, says Emmons, and there are four indicators to keep an eye on: falling 30-year fixed mortgage rates, sales of existing homes, real (inflation-adjusted) home prices and the contribution of residential investment to growth of U.S. gross domestic product.

Mortgage loan interest rates that fall from their most recent cyclical peak have preceded each of the three most recent U.S. recessions by four to seven quarters. Emmons includes the following graph showing interest rate movements around the recessions of the early 1990s, 2001 and 2008. Precedent indicates the beginning of the next recession in the fourth quarter of this year. 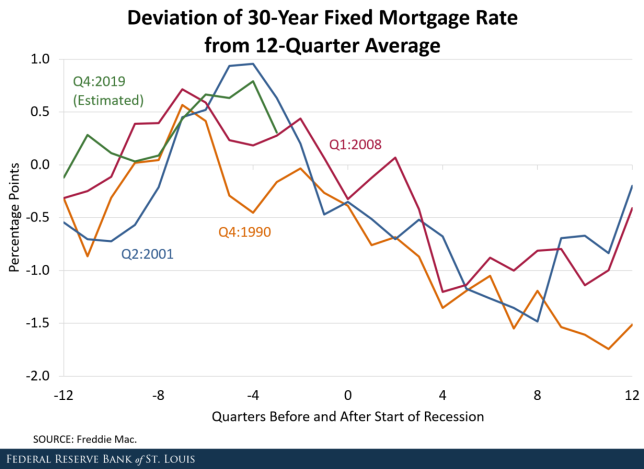 The rate of sales of existing homes declined compared to the rate of the three-year period ending four quarters earlier. Current home sales have fallen in each of the past two quarters, a pattern consistent with the three most recent recessions. Emmons interprets the current sales pattern to indicate a recession beginning in the fourth quarter of this year.

While home prices continue to rise, the increases have moderated. This pattern, too, is consistent with the behavior of home prices in each of the past three recessions. Again, this signal points to a recession beginning in the fourth quarter of 2019.

Residential investment’s contribution to U.S. GDP growth has been modestly negative recently and is “very similar” to the periods preceding the 1991 and 2001 recessions. This indicator also points to a recession beginning in the fourth quarter of this year.

Emmons concludes: “Combined with movements in other indicators with good forecasting track records (such as the inversion in the slope of the Treasury yield curve), these housing measures suggest an above-average risk of a recession within the next few quarters.”

No one can know for sure when the next recession will begin, Emmons concedes, but the patterns in these signals from the housing market are “well within the range traced out in the run-up to the three most recent recessions.”

It’s not necessary to dig too hard to turn up other recession signals. The latest report on China’s manufacturing activity as measured by the purchasing manager index fell below 50 in May, its lowest level since January. Current patterns in U.S. equities markets generated a warning from analyst Masanari Takada at Nomura Securities that the S&P 500 index could plunge by 20% to 40%. A recent Merrill Lynch survey of money managers notes that equities are fully valued and that markets have reached the late stages of a 10-year bull run.