Satellite imagery has revealed what appears to be a second leaking well in the Gulf of Mexico about 10 miles offshore of Louisiana. The semi-submersible Ocean Saratoga, owned by Diamond Offshore Drilling Inc. (NYSE: DO) and operated on behalf of privately held Taylor Energy. The discharge was noted in satellite photos of the area, as seen in this photo from the European Envisat satellite. 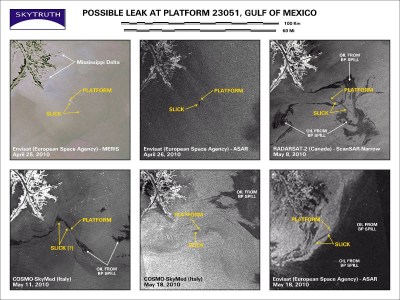 The photo also shows the massive slick coming BP plc’s (NYSE: BP) leaking Macondo well as it approaches the Louisiana Coast. The second discharge appears to be small, and was first noticed by Skytruth.org. So far, Diamond Offshore has not commented on the apparent leak, nor has Taylor Energy.

The discharge was noted as a leak by the National Oceanic and Atmospheric Adminstration in a map published on April 30th. The well is reportedly being sealed and abandoned. Federal officials have not responded to questions about the size of the leak, how long it has flowed, or whether it can be plugged.

No federal officials have said anything about this possible second leak except that they know it’s been reported. That is not a sufficient response.

Can it be that federal agencies have “gone native” and identify more with the companies they are supposed to regulate than with the citizens they are supposed to serve? The president promised more than that, and he should find some people who will help him deliver on that promise. So far, the federal response to the BP spill and to this possible second leak has lacked both leadership and commitment. That has got to change.