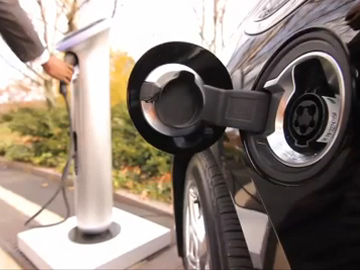 General Electric Co. (NYSE: GE) is furthering its ambitions to promote cleaner energy and its Ecomagination initiative, although this is actually a company-wide issue.  GE has announced that it will purchase 25,000 electric vehicles by 2015 for its own fleet of automobiles and through its Capital Fleet Services business.  To date, this represents the largest single electric vehicle commitment ever announced.  More importantly, GE is converting at least half of its 30,000 global fleet.  The company has said that it will partner with fleet customers to deploy a total of 25,000 electric vehicles by 2015.

General Motors (GM) is getting the win here.  GE will initially purchase 12,000 GM vehicles, beginning with the Chevrolet Volt in 2011.   The company will then add other vehicles as manufacturers expand their electric vehicle portfolios.

GE has one of the world’s largest auto fleets.  Its businesses will benefit from an emerging electric vehicle market that could deliver up to $500 million in GE revenue over the next three years, including rapidly developing markets for GE’s charging station, the WattStation.

Since its inception in 2005, more than 90 Ecomagination-approved products have been brought to market with revenues reaching $18 billion in 2009.