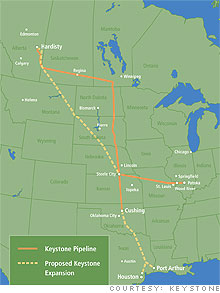 Whether or not the 1,700-mile Keystone XL that would transport crude oil from Canada’s oil sands to the US Gulf coast is necessary all depends on one’s point of view.  Some, mostly in the oil business, see the pipeline as a way for the US to reduce its dependence on crude imported from unstable sources of supply in Africa and the Middle East. Others see the pipeline as a license to increase greenhouse gas emissions at the oil sands site in Alberta.

The Keystone XL pipeline would be built by TransCanada Corp. (NYSE: TRP), utilizing a piece of its existing Keystone pipeline system that delivers crude to facilities owned by ConocoPhillips Corp. (NYSE: COP) in Illinois and to the Cushing storage facility in Oklahoma. By extending the pipeline to the Gulf coast, oil sands developers gain access to the largest concentration of oil refineries in the Us. They also gain access to Gulf coast ports that could be used to export any Canadian crude not purchased by those refineries.

As we pointed out in an earlier article, because the proposed pipeline crosses an international border, the US Department of State must issue a permit for the line.  The State Department’s preliminary environmental impact statement was not deemed adequate by the US EPA, primarily because the document did not provide enough detail about greenhouse gas emissions related to the extraction of bitumen.

The government of Alberta has chided the EPA for sticking its nose into the province’s, and Canada’s, business. Canada’s Financial Post cites a letter to the EPA which states that Alberta “believe[s] that the impacts occurring outside your jurisdiction are not substantive to the assessment of the pipeline.”

There’s the argument in a nutshell. Canada believes that it is fully capable of determining the environmental impacts of oil sands mining on its own, and the US EPA thinks that Canada needs a little push to come to the right decision.

From a crude oil supply point of view, the Keystone XL pipeline does make economic and energy-source-stability sense. The US would like to increase its imports of crude from Canada, our largest and friendliest trading partner. The pipeline, though, depends on expanded production and that production won’t be expanded until the pipeline receives its required permits. Delaying the pipeline permits for two or three years could effectively kill the $12 billion project

From an environmental point of view, the data is mixed. The Royal Society of Canada study cited in our earlier article found no current threat to the regional water supply and no impact on the health of downstream residents. But the study did note several areas that need additional oversight, such as handling tailings, greenhouse gas emissions levels, and inadequate regulatory oversight.

The Canadian government, and the companies involved in mining and transporting bitumen, want to forge ahead with the Keystone XL project and fix whatever problems there are along the way. Waiting for detailed environmental impact studies could take another two or three years. The US EPA and other citizen environmental groups want to hold off on permits until the detailed studies are complete and a plan is in place to minimize environmental impacts.

We concluded in our previous article that the chances that environmental concerns would trump energy supply were slim and none. There’s really no reason to change the odds at this point.