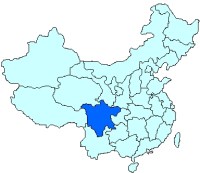 ) to develop a shale gas deposit in China’s Sichuan Basin. The contract area covers about 3,500 square kilometers (about 1,350 square miles) and is the first production sharing contract between a Chinese and a foreign company. The contract still needs government approval.

Shell may be first, but Chevron Corp. (NYSE: CVX), Total SA (NYSE: TOT), and BP plc (NYSE: BP) have also joined with Chinese firms to search for shale gas. The US Geological Survey estimates that China has reserves of 1,275 trillion cubic feet, virtually none of which has been extracted yet.

Shell did not provide any financial details on the contract.