Total gasoline inventories decreased by 1.9 million barrels last week and remain in the upper limit of the five-year average range. Total motor gasoline supplied averaged about 8.5 million barrels a day over the past four weeks — a rise of about 2% compared with the same period a year ago.

Crude prices were about down about 0.5% before the EIA report at $92.37 a barrel and quickly rose to near $93 a barrel following the report. Crude prices are down sharply over the past several days, but gasoline prices continue to climb.

Here’s a chart based on EIA data for the East Coast of the United States that shows the relationship between crude oil stocks and gasoline stocks. For a variety of reasons, it is gasoline inventories, not crude oil inventories that are driving prices higher. While the East Coast gasoline stocks have been the most severely hit, the same general pattern is visible in all other regions of the country, except the Rocky Mountains. 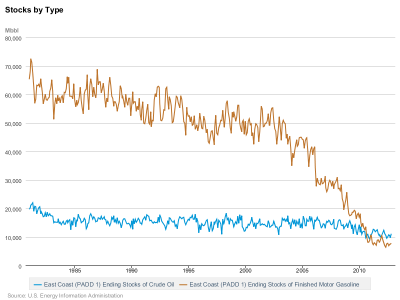