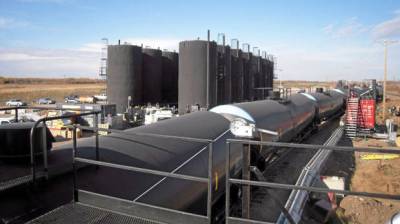 The amount of crude oil delivered by rail in the United States set a record last year by an overwhelming margin. The U.S. Energy Department said it expects domestic crude oil production by 2014 to reach 7.8 million bpd, a 20 percent increase from today’s figures. That’s enough oil production to seemingly strain U.S. oil pipeline capacity. The Association of American Railroads states that nearly a quarter of a million carloads of crude oil traveled on the U.S. rail system in 2012. Last week, pipeline company Kinder Morgan said it was planning to build a rail system to carry crude oil from as far away as western Canada to the Houston market. Given ongoing concerns over pipeline integrity, projects like Keystone XL could fall by the wayside given the increased interest in rail.

Pipeline company Kinder Morgan last week announced it was teaming up with Mecuria Energy Trading Co. to build a rail project designed to handle 210,000 bpd. The project would let Mercuria source crude oil from as far away as western Canada to the Houston market for distribution. Kinder owns roughly 46,000 miles of pipelines. The deal with Mercuria, however, is the first for the pipeline giant and would feed the largest refining complex in the world.

“It will provide U.S. and Canadian producers much needed market access and optionality to deliver their crude oil production,” said John Schlosser, Kinder Morgan Terminals president, in a statement.

In late 2011, the first shipment of an estimated 70,000 barrels of crude oil traveled on the Bakken Oil Express rail system from North Dakota to refineries in Louisiana. Last month, Phillips 66 said it signed a deal to get oil from the Bakken play in North Dakota to its Bayway refinery in New Jersey. Phillips said the system could carry as much as 50,000 bpd and mark one of the first times a U.S. oil company uses rail exclusively to ship oil to the U.S. east coast.

The U.S. Energy Department said domestic crude oil production was on its way to the 8 million bpd mark. Were it a member of OPEC, by 2014, the United States would be the No. 2 oil producer behind Saudi Arabia. Pipelines in the United States carrying oil from northern fields like Bakken to southern refineries are nearly full, prompting companies like Kinder and Phillips to turn to rail deliveries instead.

Alberta Premier Alison Redford was in the United States to lobby for the Keystone XL pipeline last week. Proposed more than five years ago, the pipeline system could carry as much as 590,000 bpd of Canadian crude oil to U.S. refineries. Regulatory hurdles and environmental concerns are in part to blame for some of the project’s delays, however. By 2011, three years into the Keystone XL planning process, the U.S. Energy Department  rail was on the rise. With a 256 percent increase in oil deliveries by rail in 2012, an interest in megaprojects like Keystone XL may be receding.

By. Daniel J. Graeber of Oilprice.com